​When the comunicado oficial of Tanguy Ndombele’s £55m arrival to Tottenham blessed our Twitter timelines, there was a significant buzz surrounding the signing among the online Lilywhite faithful.

This was a player who’d gained a lot of traction within ‘Football Twitter’ following his Champions League displays against Manchester City and Barcelona the previous season. 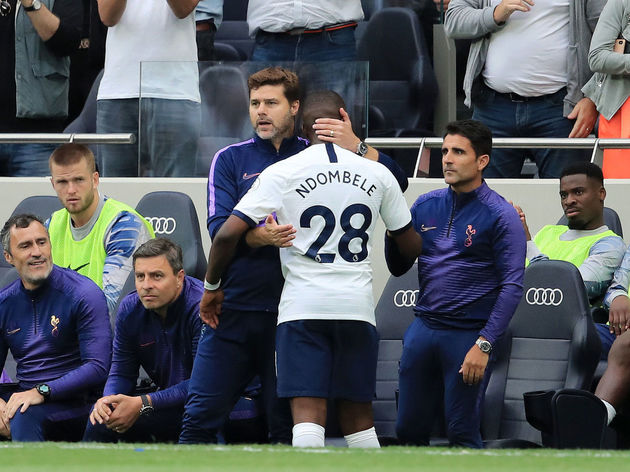 Less than a year on, with football forced into a hiatus, Pochettino’s unemployed, Jose Mourinho is at the wheel, the new boss hasn’t been very nice to Ndombele and there are genuine Spurs fans demanding the club cut their losses with the Frenchman and ditch him in the summer, or whenever the transfer window reopens.

Amid a wretched campaign for Tottenham, it’s been a mightily frustrating one for the player once tagged ‘El Feinte‘ during his Guingamp academy days.

And ever since that first minor issue back in August, the 23-year-old has struggled – completing just one Premier League encounter from start to finish since September. His continued absences certainly led to frustration among Spurs fans before in recent weeks, his ‘half-hearted’ displays have seemingly triggered a nerve among those who rightly like seeing their players ‘put themself about’.

The clip where Ndombele, who had just come on as a substitute, made a pretty woeful attempt to dispossess Wolves’ Pedro Neto before rather casually attempting to track the Portuguese starlet as he weaved past countless Spurs defenders gained a significant amount of attention within the fanbase. And a week later, Jamie Carragher’s superb analysis

It was a five-minute analysis sparked by comments made by Mourinho following his side’s 1-1 draw at Turf Moor. The Spurs boss was quoted by Football London as saying: “ The main factor in Ndombele’s acclimatisation struggles remains to be seen: is he still dealing with a niggling injury? Is his unique gait causing a problem? Is it an unwillingness to perform – he had attitude issues during his Amiens days? Or is it the simple case of adjusting to a new environment and playing in a division that’s almost incomparable to Ligue 1?

The latter seems the most likely and it’s starting to make a little more sense as to why Pochettino said it’d take Ndombele two years for him to fully settle in north London despite just scoring a peach on his debut against Villa.

It’s been his performances out of possession that have seen fans jump down the Frenchman’s throat and while recovery running wasn’t exactly his forte at Lyon, we were seeing a much more athletic footballer off the ball than the current Spurs iteration.

Nevertheless, the vast amount of criticism he’s received would make anyone think Ndombele was the second-coming of Didier Zokora with the ball at his feet. The Frenchman is quite the opposite – he’s one of the most naturally gifted footballers on the planet.

Ndombele’s an edge of your seat footballer who you’d genuinely pay to watch even if he’s half-fit and can only muster a 15-minute cameo.

His variation, unpredictability and immense ball-manipulation make him one of the most press-resistant and creative players around – assists don’t define creativity – while he’s able to penetrate defensive lines at will with crisp and perfectly weighted vertical passes as well as graceful but equally powerful driving runs.

The stats below would also suggest that despite his struggles in defensive transition, his actual defensive output this season has been quite underrated: winning over eight duels and making 1.62 tackles per 90 minutes – which leads Tottenham

On the European stage, Ndombele shone against Red Star (twice), while his brilliance in the opening 30 minutes against Bayer​n

And following his fine two displays to start the Premier League campaign, the Frenchman also produced a man of the match performance against Norwich

It was a performance that led to Canaries midfielder Alexander Tettey saying this about Ndombele on a Norweigian podcast: “Ndombele was very good, he had an incredible technical repertoire. When he had the ball at his feet he could dance around you on the football pitch. After the match, I was like, oh, okay then” Tettey named the Frenchman as his finest opponent in the Premier League this season, by the way.

His cameo performance at Anfield back in October was one that went under the radar but you’ll struggle to find a superior performance off the bench this season. Following 70 minutes of Liverpool

Oh, and his substitute performance in the 2-0 win over City El Feinte

In what’s been portrayed as a massively disappointing campaign, the Frenchman has still made four goal contributions in under 1,000 minutes of Premier League action.

Yes, his fitness issues are concerning but how can you give up on such a gargantuan talent after barely a year? There’s a reason why PSG and Barcelona The Portuguese boss knows that Ndombele may well be the most important man in shaping his spell in north London and is trying his absolute best to squeeze all the potential out of him. Mourinho, like everyone at the club, is desperate to see the 23-year-old succeed.

So, for all the Spurs fans crying out for an heir to Mousa Dembele’s throne, just relax, you signed him last summer, you’ve just got to give him a little bit of time.