23 October 2011 ​is a date which will go down in Manchester City folklore. Not only did they inflict the heaviest defeat of Alex Ferguson’s tenure, they climbed five points clear at the top of the table on the way to their first title since 1968.

This match could be seen as the first significant crack in United’s dominance of football in Manchester as ‘the noisy neighbours’ silenced Old Trafford on that famous afternoon. Mario Balotelli opened the scoring after 22 minutes, stroking James Milner’s precise cut-back into the bottom corner. Incredibly, it was only 1-0 at halftime but in the first minute after the restart the Italian’s pace took him beyond Jonny Evans who hauled him to the ground, rightfully receiving his marching orders.

Now against ten men, City began to turn the screw as ​David Silva produced a magisterial display which would become increasingly common during his time in the north of England. The Spaniard combined with Milner who drilled the ball across the box for Balotelli to make it 2-0 on the hour mark.

Sergio Agüero made added a third from a similar low cross after 69 minutes as the travelling fans celebrated manically. A 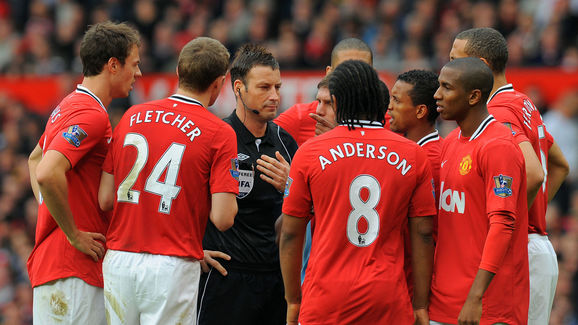 Prior to the derby, ​Manchester United had done well to keep pace with City’s electric start to the season as both teams were undefeated in their first eight league games.

And with United just one goal behind with half the game gone, they may have been able to stay on City’s coattails for longer had ​Evans not been sent off. As Ferguson would outline after the game, ‘the sending off was the killer blow’.

Nemanja Vidić wasn’t fully fit for the encounter and the right-side of United’s backline, Evans and a 21-year-old Chris Smalling, looked in desperate need of the Serbian’s calming presence as City mercilessly targeted that flank. Fletcher didn’t have a particularly poor game (not worse than any of his teammates), or a particularly good game, but his goal in the 81st-minute was the catalyst for what proved to be Manchester United’s downfall.

United urged men forward at 3-1 in search of another famous comeback but this left them helplessly open on the counter, which ​City ruthlessly exploited to turn the result from a surprising defeat to a historic capitulation.

Still in a daze from the beating his team had taken, Ferguson admitted: “ City lined up with what looked like a 4-4-2 with Silva and Milner nominally in wide-midfield positions. Yet these two had the licence to drift freely around the pitch and it was their movement which tore apart United’s back line.

Both would float across to the opposite flank, creating overloads and playing one-twos which would lead to cutbacks – foreshadowing the type of goal City have perfected under Pep Guardiola in recent years.

Milner assisted the first two goals from this pattern before Silva delivered one of the best passes of the season as, in the third minute of stoppage time, the Spaniard volleyed the ball from his own half between two defenders to find Džeko, who gobbled up his second of the day and City’s sixth.

Balotelli provided one of the iconic ​Premier League moments after neatly sliding in the opener, when he lifted his shirt to reveal the simple, but brilliant, message which read: ‘Why Always Me?’

The 21-year-old Italian may have lit up the derby but this was less than 36 hours after almost lighting up his house. In the early hours of Saturday morning Balotelli was forced to escape a ‘substantial fire’ in his home after he tried to set off fireworks through his bathroom window.

The next morning, he turned up for training as normal and was then superb in the derby. In a brilliant PR move Balotelli was made the ambassador for firework safety ahead of Bonfire Night two weeks later.

As one of the greatest characters the Premier League has seen, his off-field antics, be that breaking into a women’s prison to look around or confronting the bullies of school children, shouldn’t outshine the reality that Balotelli was an excellent, if inconsistent, player for City and this was one of his finest days in Sky Blue.

What Aged the Worst 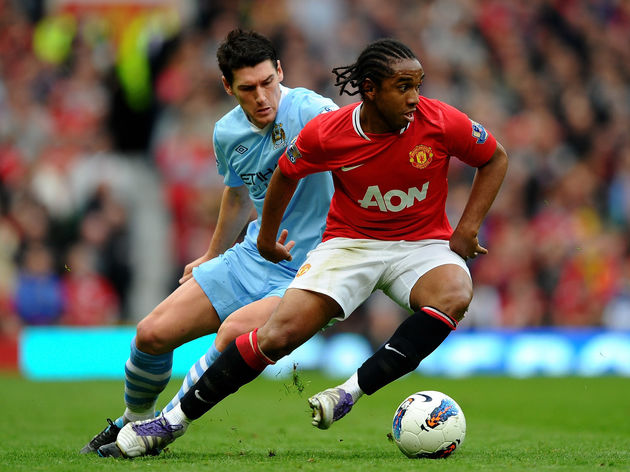 Anderson arrived at Manchester United in 2007 on the crest of an unbelievable wave of hype. The following year he would pick up the ‘Golden Boy’ award given to the best footballer under the age of 21.

He put in a dreadful performance against City that day in 2011 and was hooked with 25 minutes to go as Ferguson ended his miserable afternoon. The following year as Manchester United claimed their 20th (and last) English league title Anderson only made nine starts before his form truly dropped off a cliff under the stewardship of David Moyes.

Anderson finally left Old Trafford in 2015, returning to Brazil before his ​contract was terminated with Internacional. At 31, he ​officially retired earlier this season after washing up in the second tier of Turkish football.

What Aged the Best Almost nine years on from the historic drubbing, Silva and ​Agüero are still haunting Premier League defenders. Both got on the scoresheet that day and have continued their trajectory of success, winning four league titles and six domestic cups together at City.

Whether the manager is Roberto Mancini, Manuel Pellegrini or Pep Guardiola, every coach at the helm of City has consistently played these two greats of the Premier League era. With the derby win City were five points clear but it was only October and this was Ferguson’s Manchester United.

Both teams were level on 45 points at the halfway mark but a dire run of one win from five matches in spring left them eight points behind with eight games to go.

But, in an incredibly uncharacteristic run of poor form, Ferguson’s side lost 1-0 away to Wigan and recorded an inexplicable 4-4 draw with Everton at home. When Vincent Kompany scored the only goal of the second derby that season, Manchester United fell behind their rivals on goal difference.

Going into the last game of the campaign City needed a win and despite falling 2-1 behind at home to QPR we all know what happened next (Džeko 91.15, Agüero 93.20) and Mancini had led his side to the title at the expense of their most bitter rivals.