However, there have been plenty of cup finals, both real and proverbial, along the way as the club has secured relative Premier League stability, not to mention the golden era of the 80s.

Here’s a look at some of the club’s most clutch players. 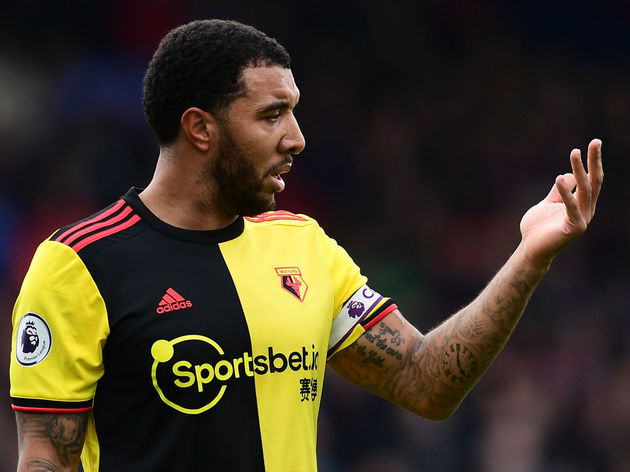 It would be downright insolent to start with anyone other than Troy the Boy, Mr Cojones himself.

Deeney, while a true demon at Championship level, has never exactly been prolific in the top-flight. However, he has an accumulator-busting habit of popping up against big teams.

He’s also a true leader (well, he’s very fond of reminding people that he is one), and you always feel Watford have a chance when he’s on the pitch.

Biggest Moment: ‘Here’s Hogg… DEENEY!!!!!! Do not scratch your eyes, you are really seeing the most extraordinary finish here!’

We’ve all seen the YouTube footage of this goal about a thousand times, and the commentary is stored in every Watford fan’s head.

If you somehow missed this, Manuel Almunia saved Antony Knockaert’s last-gasp penalty in the Championship play-off semi-final, with Deeney sealing the game after getting on the end of Jonathan Hogg’s knockdown after Watford surge forward. Blissett is probably most famous for (allegedly) being accidentally signed by AC Milan, and for subsequently complaining about the lack of access to Rice Krispies while at said club.

This is pretty unfair on a player who was a monumental star for Watford, starting out in the Fourth Division and ending up as top scorer in the English top flight as Watford ran Liverpool close for the title.

Not only did he score a hattrick on debut against Luxembourg, but in doing so became the first black footballer to achieve this feat for England, which for a man of many big moments would have been especially satisfying. There’s probably no need for me to recall Marlon King’s pretty chequered history off the pitch, which has overshadowed the occasions on which he showed his true potential as a footballer.

One such season was Watford’s 2005/06 promotion campaign, where King tore up the league with 21 goals as Aidy Boothroyd got the Hornets promoted in his first-ever season as a manager (don’t ask what happened afterward).

Injuries and some unsavoury criminal offences meant that he never quite returned to those levels after an initially bright start to life in the top-flight.

Biggest Moment: King put Crystal Palace defender Darren Ward on skates to open the scoring against the Eagles in the 2006 play-off semi-final, turning and finding the corner with ease to propel Watford on to a 3-0 lead which turned out to be unassailable.

The journeyman’s name is arguably a little out of place among some of the luminaries on this list, but who knows if Watford would be the Premier League club they are today without him?

Lee’s four goals in the final five games of Second Division action (League One for our Generation Z readership) put Watford out of sight of their competition, and though he managed just one more goal for them thereafter it was his contribution that meant Watford did not sink further into the footballing doldrums.

Biggest Moment: Lee’s goal against Fulham clinched the Second Division title, but it was the rebound he gobbled up against nearest rivals Bristol City which meant that Watford wouldn’t be spending any more time in the third tier. It’s often forgotten that one of England’s greats started his career at Watford, just as it’s relatively unknown that Sir Alex Ferguson turned down the chance to make the winger one of his earliest signings at Manchester United.

Like Blissett, Barnes was a part of Watford’s steady rise up from obscurity, managing an amazing 13 goals in his first league season as a 17-year-old, and he was clearly destined for the top.

Biggest Moment: ‘That’ goal against Brazil aside, one of Barnes’ best efforts is the above mind-blowing chip against Birmingham in the Sixth Round of the FA Cup on the way to Watford’s first-ever final appearance. A slightly faded wonderkid like Deulofeu and a club like Watford are a match made in heaven, with the Spaniard under no pressure to be anything other than a mercurial genius.

His spurts of inspiration for Watford and previously Everton have been a sporadic joy of watching Premier League footy in recent years, and it didn’t feel right when Barcelona briefly re-signed him.

Biggest Moment: One of the best recent FA Cup semi-finals is most remembered for Deulofeu’s impudent lob which John Ruddy is still rumoured to be looking for.

The winger wasn’t done there, deftly finishing across the former Norwich keeper in the game’s 104th minute to give Watford the privilege of getting thrashed by Manchester City.

The Scottish forward formed a steady partnership with Mo Johnston during the mid-1980s, but is best remembered as a rather gruesome footnote in footballing history – you might want to be sitting down for the anatomy of his biggest moment in a Watford shirt.

Biggest Moment: Reilly scored the goal which took Watford to the 1984 FA Cup final, getting on the end of one of Barnes’ crosses to beat Plymouth and set up a meeting with Everton at Wembley.

Almost 20 years removed from the goal, with Reilly now working at a Corby building site, a fellow worker came over and bit off part of his right ear. The only explanation offered for this unprovoked attack was the word ‘Plymouth’ whispered into Reilly’s ear by his assailant, a classic example of something literally coming back to bite you.