Watching players writhe around on the ground when you know full well there’s nothing wrong with them is one of the great scourges of the modern game.

Normally we just have to grin and bear it, biting our tongues as the supposedly stricken player comedically limps off the pitch – only to make a miraculous recovery seconds later.

What the public yearns for is a hero. Someone who can expose this nonsense for what it is and rid the beautiful game of play actors once and for all. 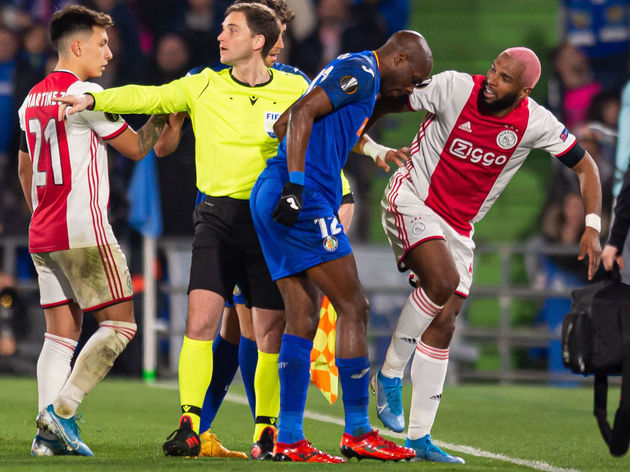 Well, on this evening’s evidence 90min might have just found one in Ryan Babel.

With just under an hour on the clock in Ajax’s Europa League meeting with Getafe, Babel was involved in a petty off the ball incident with Allan Nyom. The former ​Liverpool man lost out on a 50/50 challenge and then sneakily tripped the Cameroonian up as he tried to stride away.

The contact was… minimal, to say the least, but it still made Nyom exhibit a series of body contortions akin to some sort of bizarre interpretive dance.

The defender thrusted himself down to the floor, mouth gaping, before executing a textbook forward roll followed by a less impressive barrel roll.

Ryan Babel is a SAVAGE!

Alan Nyom starts rolling around on the floor, Babel starts imitating him and then mocks his limping with a fake cry!

Babel came bounding over seeking justice, and he got it in the form of his brutal takedown of Nyom’s antics.

First, the Dutchman mirrored his opponent’s drop to the ground before pulling out some much more eye-catching barrel roles. Not content to leave it there, Babel then mimicked a crying child right in Nyom’s face before copying the full-back’s fake limp.

The Ajax forward may have got a yellow card and Getafe did go on to clinch the game in a surprising 2-0 win, but in our eyes there was only one winner in Madrid this evening.