The Magpies ​fell to a 1-0 defeat, the only goal of the game coming in controversial fashion when Chris Wood rose at the back post to head in an Ashley Westwood corner in the second half.

There was little to contest about the goal itself, but the circumstances that preceded it, with Robinson indecisive over whether to award a corner or a goal-kick when the ball appeared to stay in play sparked some ire among those of a Newcastle persuasion. 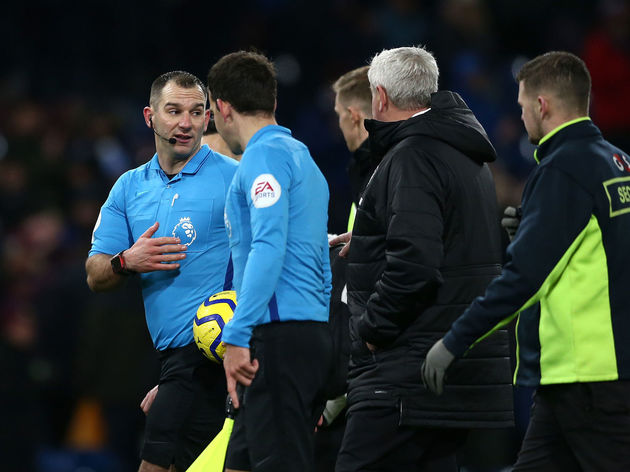 And Bruce was among the leading critics, laying some heavy criticism on the young official, who was taking charge of his first ​Premier League match.

“He’s then listened to somebody [the assistant referee] who was probably 80 yards away. Looking at it again, it’s a clear and blatant foul [before that].

“OK, we could have defended the corner better, but we are talking about a decision here that’s ultimately cost us the game.”

He went on with an air of derision, calling into question Robinson’s wider performance, and whether he was ready to make his top-flight debut.

I hope Steve Bruce will reflect on his comments of Ref Tim Robinson. Yes he did give a goal kick and change his mind. There was not a foul, the ball did go over the goal line. It was a corner kick. Yes I tidy and points for Robinson to learn from. Don’t blame him for your loss

He added: “Since Tuesday we knew this referee was going to be making his debut.

“Unfortunately there were far too many mistakes made and for me, he didn’t look ready to referee a Premier League game.”