Two brilliant goals and an assist from Kevin de Bruyne saw Manchester City through to an important victory at the Emirates, and piled further misery on managerless Arsenal.

Barely 90 seconds were on the clock when a meticulous ​De Bruyne strike found the top corner from the edge of the box, but that only came after Gabriel Martinelli had out-muscled both Nicolas Otamendi and Fernandinho to force a fine close-range stop out of Ederson before the clock struck one.

The frenetic pace didn’t quite keep up, but De Bruyne was playing at his very, very best, and two further moments of real quality from the Belgian had put the game to bed by half-time.

The game was racing away from Arsenal, and only a terrific stop from Leno prevented a spectacular first-half hat-trick moments later.

The game was buried by half-time in more ways than one, and the second 45 failed to deliver more than a few half-decent chances – with Riyad Mahrez and Sterling perhaps each feeling they should have added number four.

Nonetheless, City were able to see the game out for a huge win, while the disappointing Gunners slump into ninth.

One win in four games under interim boss Freddie Ljungberg meant a positive result here – or at least a big performance – was required to salvage any hopes the Swede had of holding onto the job until the end of the season. And yet, while you might have foreseen a sense of dread around the Emirates prior to kick-off given the circumstances, it didn’t quite seem that way.

The champions were wounded, and Monday’s hard-fought victory at West Ham had acted as a much-needed source of optimism – one that had the Gunners faithful thinking that maybe, just maybe, this could represent a major turning point in their season.

And then they were 2-0 down by the 15th minute, and it only got worse from there. 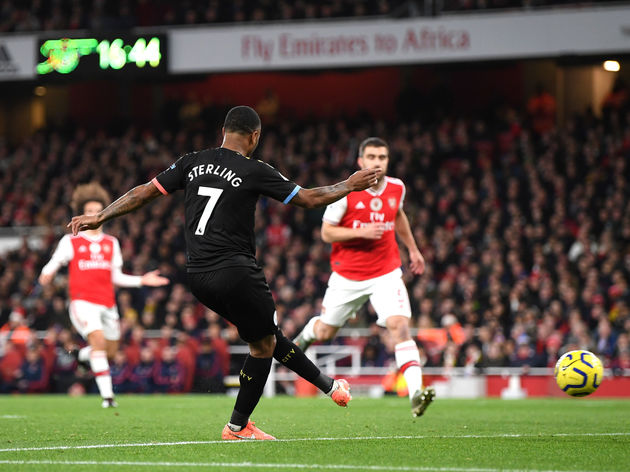 There’s only so much you can do when City show up at their best, and there should be some sympathy for Ljungberg’s side, who were forced to play the lion’s share of the game with Bukayo Saka at left-back after Sead Kolasinac signed his name onto a mounting injury list.

Yet their defensive frailties were once again brutally exposed. They have now gone 15 games without a clean sheet, and if they keep going like this, then there won’t be many more between now and May.

A reasonably low-profile arrival from Ituano in the summer, 18-year-old Gabriel Martinelli has made the most of his limited opportunities so far, and was by far and away his side’s most spirited and enthusiastic performer in this one – even if little was going his way.

Martinelli putting his senior colleagues to shame by doing nothing exceptional but just showing the energy and hunger levels required of a professional footballer.

We don’t deserve Martinelli. Kid actually has more passion than anyone on the team including our “captain” and probably getting paid 15 times less

He kept his head up and continually gave City something to think about with his driving runs, tricky feet and positive movement. He looks a real coup and will only get better, provided he is allowed a sustained run in the team – which he will surely be given on this evidence.

Indeed, after their catastrophic defeat in last weekend’s Manchester Derby, City had dropped as many points already as they did in the entirety of last season, and needed to bounce back with a victory to keep their title hopes on life support.

And they did more than just that. The champions barely advanced from first gear, but their superior quality was demonstrable throughout. With some incisive passing and ingenious use of space, they ran over an Arsenal defence that looked at times as if it wasn’t even playing the same sport.

In the end, it was a comfortable victory for a City side who don’t believe they are dead just yet; though a 14-point gap means all they can do is keep winning, and hope for a slip-up or five on Merseyside.

If you hadn’t guessed already, this one goes to Kevin de Bruyne, who utterly ran the show with a performance that demonstrated exactly why he is, at present, the best midfielder in the world.

2 Goals & 1 Assist in 45 minutes for Kevin De Bruyne!
Top of the Assist chart with (10) Assists
Top of the chances created chart with (61) chances!
Best play-maker in the league  pic.twitter.com/qS9wpc9amM

Two spectacular finishes and an impressive assist saw him almost single-handedly win the game for his side by half-time, and though he dropped deeper as the game wore on, he continued to be a steadying influence for his side, who would be lost without him.

Arsenal travel to Everton next weekend looking to set things straight before their Boxing Day encounter with Bournemouth.

City, meanwhile, travel to Oxford United on Tuesday in the EFL Cup quarter-finals, before a huge clash with high-flying Leicester City next weekend.