​Liverpool have the chance to make it a hat-trick of wins from their first three games of the 2019/20 Premier League season as they welcome Arsenal to Anfield on Saturday.

After losing the Community Shield on penalties to Manchester City in early August, the Reds have secured a trio of consecutive victories in all competitions. The UEFA Super Cup was brought home to Merseyside as they defeated Chelsea via a shootout, whilst both Norwich City and Southampton were unable to cope with their ferocious frontline. ​Arsenal could also make it three wins form three having collected all three points in matches with ​Newcastle United and ​Burnley. The Gunners made heavy investments towards the end of the summer transfer window and their decision to go for broke appears to be paying off.

​Here’s our preview of the ​heavyweight clash.

Jurgen Klopp was rocked by news of an injury to understudy goalkeeper Adrian in the aftermath of the Super Cup victory over the ​Blues, but the Spaniard recovered to face ​Southampton last weekend.

First-choice shot-stopper Alisson is still sidelined by a calf strain, however, whilst right-back Nathaniel Clyne continues his recovery from a cruciate ligament rupture in pre-season.

Naby Keita is a doubt for the game with the Gunners, though it is the visitors who have more injuries to account for. Mesut Ozil and Granit Xhaka are expected to be fit, though the pair will be assessed closer to kick-off. Nevertheless, the greatest area of concern for Unai Emery is at the back. Defensive quartet Kieran Tierney, Hector Bellerin,

The Gunners have claimed victory over ​Liverpool a total of 78 times, whilst the Merseysiders have been triumphant on 87 occasions, the latest coming via a 5-1 humbling at Anfield last term.

Young full-back Ainsley Maitland-Niles’ early score had Arsenal on course for a first win against the Reds since April 2015, but their hosts came roaring back with a scintillating first-half display. Roberto Firmino grabbed himself a hat-trick, with Sadio Mane and Mo Salah getting a goal apiece to complete the rout and leave Emery fuming.

The result was a fitting way to end a marvellous 2018 for Klopp and his troops, sending out a clear message to rivals and extending the side’s lead at the top of the ​Premier League to nine points.

The last time Arsenal won their first two games of a league season was precisely a decade ago. It’s no wonder that Emery and the new faces at the club have got supporters excited for the season ahead.

Though they were far from spectacular in victories over Newcastle and Burnley, there were several superb individual performances. Pierre-Emerick Aubameyang continues to thrill Gooners with his marvellous form in front of goal, whilst summer loan signing Dani Ceballos was a delight to watch in the 2-1 win against the Clarets. Klopp has likewise overseen a couple of wins for the Liverpool to kick-off the new top-flight season in fine fashion. A monstrous attacking display blew Norwich City away before half-time in the opener, whilst a long-range rocket from Mane and a clinical Firmino finish saw them avoid slipping up away to Southampton.

However, the Reds looked vulnerable during their UEFA Super Cup triumph over Chelsea, though the Londoners were unable to capitalise on a lack of solidity in the Liverpool backline.

Here’s how the two teams fared in their last five fixtures:

Arsenal have been transformed over the summer after going for broke in the transfer market. Nevertheless, a trip to Anfield is an intimidating prospect and Emery’s men would do well to leave Merseyside with a draw.

Given Liverpool’s less-than-convincing performance against another ‘big six’ side in the form of Chelsea, it is not beyond the realms of possibility that the Gunners could take a point. 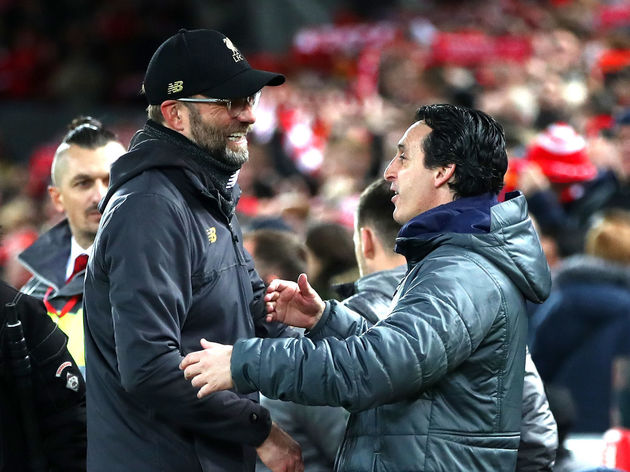 Aubameyang will fancy his chances, as will Alexandre Lacazette and the mercurial Ceballos. The real issue if whether the backline can hold out against a red-hot Mane. A hugely entertaining could well be on its way.