Two Megan Rapinoe penalties, either side of an exemplary Jennifer Hermoso strike, were enough to book the USWNT a quarter-final date with hosts France on Friday at the expense of a stubborn Spain side.

​To say the game started brightly would be the understatement of the tournament so far. Captain Rapinoe, in amongst it as ever, gave her side the lead from the penalty spot after Spain’s Mapi Leon brought down Tobin Heath in the area after just seven minutes, but the lead was cancelled out almost immediately.

Perhaps complacent after cruising into an early lead, it was the USWNT’s turn to showcase some questionable defending, as goalkeeper Alyssa Naeher’s slack pass out from the back afforded the ever clinical Hermoso an opportunity. She took it with her signature grace, lobbing the stranded keeper to level things up before the ten minute mark. From there, the first half would progress at a modest pace, with the US controlling possession for long spells without creating too much.

That theme continued into the second 45, as Spain’s game-plan to frustrate and limit their more esteemed opponents began to seem more and more effective. They could even have had the lead, but after Lucia Garcia’s tantalising low cross evaded everyone, they found themselves at the mercy of Rapinoe once again, after Virginia Torrecilla tripped Rose Lavelle in the area. VAR threatened to overturn the second penalty decision of the game, but it was given, converted, and celebrated wildly by the swathes of American supporters. 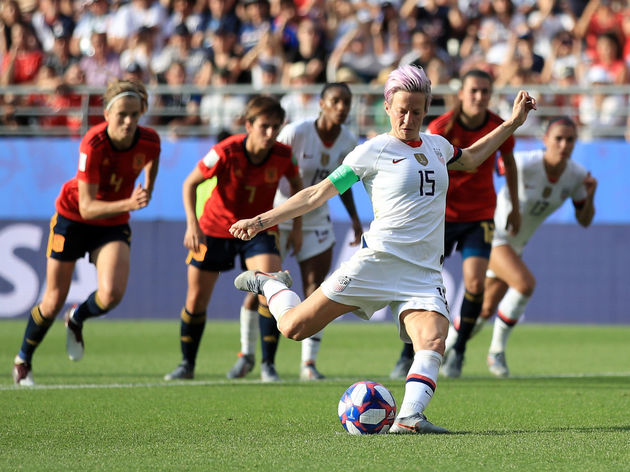 You got the sense the game was won there and then, given Spain’s prior toothlessness in front of goal and the USA’s track record for effective game-management when required, and that proved to be the case, as what had been an engaging counter frittered out after seven minutes of VAR-fuelled stoppage time.

After a group stage campaign that highlighted the best and worst of the current Spain side, they had it all to do against a USA team who won all of their three matches and had clear intentions of steamrolling their way to the quarter-finals, as evidenced by their lightning start.

Credit has to be given for how they reacted to going behind so early, however, as where many sides would have capitulated, Spain dusted themselves down and went after an equaliser. It came, as it tends to, through Atletico Madrid striker Jennifer Hermoso, who lobbed in her first goal from open play of the tournament.

Some further sloppy defending undermined what had been a determined performance, however, with Rapinoe awarded the opportunity to convert her second penalty of the day.

From there, the task was next to impossible, as they struggled to find a way to break down a buoyant USA side, who could smell their place in the quarter-finals after being given a reprieve. It hardly speaks to a lack of quality in the Spain side, however, as they were beaten by a team many believe will win the tournament outright. The Atletico Madrid striker was isolated up front for long spells, but was the only Spain player who ever looked like exposing a weakness or two in the American back line.

Her third goal of the tournament came in some style, and although it ended in disappointment – as she was forced off with injury five minutes before her side’s ultimate elimination – she can leave France knowing she and her side did all they could to get the better of the best international side in the world.

The USWNT’s successful passage through the group stage wasn’t as much a stroll as it was a flat-out sprint. Their 13-0 win over Thailand set the tone in their opening match, and they would score five in the two that would follow, and had yet to concede until facing Spain.

They remained clear favourites to win, but  they were facing the strongest team of their campaign so far, and that much was evident in the early stages of the game. They led early, through a preventable penalty, but some sloppy defending of their own gave Hermoso a semblance of a chance, who displayed a level of quality that had been absent from Thailand, Chile or Sweden.

However, they’d been in that position before, and their experience showed, as they continued to  play their game as if nothing had gone disastrously wrong. They huffed, puffed, and eventually found a way through with their second penalty of the evening, and while they have performed better so far in France – and will have to do so again – they found a way to earn their place in the next round.

In a game lacking the USWNT’s characteristic quality, it was the woman for the big occasion who stepped forward for the two moments that mattered, giving her side the lead from the spot early on, and keeping her composure to do so again after a prolonged VAR stoppage in the second half.

Had it not been for the experience and composure of their captain, both from the spot and on the ball throughout the game, this one could have panned out wildly differently for the US, who strengthened their status as tournament favourites.

USA will progress to face France, fresh off their victory over Brazil, in the quarter-finals on Friday.