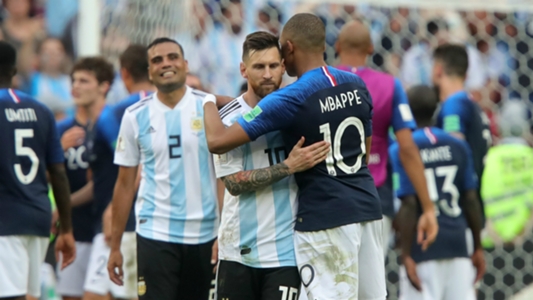 Coming from behind to beat Argentina and dump Lionel Messi out of the World Cup gave France the belief to go all the way, according to captain Hugo Lloris.

The eventual champions could well have had their tournament ended in the Round of 16 when they trailed 2-1 to 2014 finalists Argentina.

Despite a lacklustre group stage that nearly saw them eliminated, Messi’s men had gone ahead through two goals either side of half-time, erasing an early deficit after France scored on a penalty earned after Kylian Mbappe was taken down in the area.

However, a sublime Benjamin Pavard equaliser set the scene for Mbappe’s heroics, as the teenager delivered a brace in France’s eventual 4-3 victory.

It was the only real scare Didier Deschamps’ side would receive in Russia as they went on to overcome Uruguay, Belgium and Croatia to lift the trophy for the second time.

“We got the best of Argentina… of Messi’s Argentina,” Lloris told Omnisport.

“It made us realise we have the potential to go through. Every game was difficult, but we did really well.

“We could feel a very strong team ready for the challenges ahead. We faced challenges after challenges following that game until the final victory.

When you realise you forgot to put the bins out before you left for Russia…#FiersdetreBleus #WorldCup pic.twitter.com/3QPD6ozII3
— French Team (@FrenchTeam) July 19, 2018

“Every game was difficult, but we did really well.”

Paris Saint-Germain sensation Mbappe would strike again in the 4-2 final triumph over Croatia as a second-half gaffe from Lloris proved inconsequential.