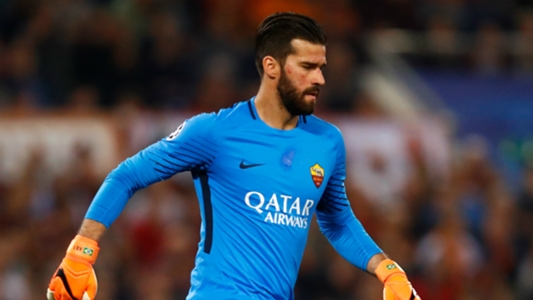 Alisson has revealed how last season’s Champions League trip to Anfield lit the fuse for what has become a world-record transfer to Liverpool.

The 25-year-old goalkeeper penned a long-term contract with the Premier League side on Thursday after Roma agreed to sell him for an initial £56 million ($73m) fee.

That price confirmed his status as the most expensive keeper of all-time and could yet rise a further £9m depending on performance-related clauses.

Jurgen Klopp described the Brazil international as “one of the world’s best” despite seeing his side put seven goals past him over the two legs of last season’s Champions League semi-final.

Though a 5-2 defeat at Anfield effectively ended Roma’s hopes of making it to Kiev, Alisson described his memories of the April clash on Merseyside as forming part of his decision to sign for Klopp’s men.

“Yes, in part it did influence the decision,” he told Liverpool’s official website.

“When you make an important decision like this it’s not just a decision to change clubs, it practically changes your entire life, my family’s life, my wife, my daughter.

“That game definitely did have an influence but I also watched other games. I’ve seen other games where I could see the way Klopp had the team playing.

When your first @LFCTV interview gets interrupted by the boss! https://t.co/hWeZgjkbRw pic.twitter.com/86SHqpfa3M

“That has made me really excited to be part of this group.”

The goalkeeper will be reunited with former Roma team-mate Mohamed Salah, who was anxious to see the keeper join, along with international team-mate Roberto Firmino.

Alisson, who had a previous spell with Internacional in his homeland, started each of Brazil’s five matches at the World Cup in Russia.