They’re two words which certainly aren’t associated with a typical derby, but Der Klassiker is one of the most-watched games on the planet.

German football’s showpiece event only has a history which goes back 55 years, and while it’s been even less since this game really was considered as the most exciting in the Bundesliga, fans from all over still make their way to Dortmund or Munich once a year just for this fixture.

So it’s no surprise there have been quite a few classic meetings between these two sides and, even though we can’t list all of them, we can list seven… A one-nil win might not seem like the most classic instalment of Der Klassiker, but this game helped Borussia Dortmund win the title in the 2011/12 season.

The game was all square heading into the latter stages of the match, but Robert Lewandowski’s stunning backheel gave the hosts the advantage – not just in the match but, if they held on, in the Bundesliga title race too.

The Black and Yellows knew three points would give them one hand on the Meisterschale, but Arjen Robben had a chance to rescue at least a point for Bayern Munich when the Dutchman was fouled inside the area by Roman Weidenfeller.

Robben stepped up to take the spot-kick, having never missed a penalty in his career, but Weidenfeller got down well to save the Dutchman’s effort and Borussia Dortmund held on for the win in what turned out be the game which won them the title. It’s not just the Bundesliga which hosts memorable Klassikers, as Borussia Dortmund needed a semi-final over Bayern Munich in the DFB-Pokal to lift their most recent piece of silverware.

Although Marco Reus put Borussia Dortmund into the lead, the game quickly turned on its head through two unlikely sources; Javi Martinez and Mats Hummels, who both scored before half-time to give Bayern the advantage.

Pierre-Emerick Aubameyang was able to level the scoreline with a simple header at the back post after getting on the end of Ousmane Dembélé’s cross, but it was the mercurial Frencham who clinched the winner for Thomas Tuchel’s side.

From a tight angle, Dembélé sent David Alaba packing with a clever fake shot, which worked the ball onto his left foot, before curling an effort in off the underside of the crossbar and beyond Manuel Neuer. If Robben’s penalty miss to hand Borussia Dortmund the title in 2012 wasn’t enough, the Black and Yellows also picked up their first-ever domestic double with a win in Der Klassiker.

It was a blistering start from the Bundesliga champions too. Shinji Kagawa prodded the ball into an empty net inside the opening three minutes, and although Robben levelled the scoreline with a penalty, Hummels but Dortmund back into the lead with a spot-kick of his own – which to this day remains the last time the German defender has scored from 12 yards.

Lewandowski found a gap between Neuer’s legs to add a third just before half time and the Pole scored Dortmund’s fourth after the restart, following a stunning counter-attack which started with a blocked shot from Toni Kroos.

Franck Ribéry pulled one back with an outstanding solo effort, but it was too little too late for Bayern Munich and Borussia Dortmund even added a fifth goal, with Lewandowski completing his hat-trick in the last few minutes of the DFB-Pokal final. The Germany legend is still the club’s all-time top goalscorer, as well as the Bundesliga’s, and his reputation as one of the greatest strikers to ever play the game is something which Borussia Dortmund know all-too-well about.

Until very recently, Müller was the top scorer in Der Klassiker history, netting 15 times. Four of those goals came in one match, an 11-1 win over Borussia Dortmund, which to this day remains Bayern Munich’s biggest ever win in the Bundesliga.

Uli Hoeness and Franz Roth found themselves on the scoresheet twice, while Willi Hoffmann, Franz Beckenbauer and Paul Breitner also scored. The consolation goal for Borussia Dortmund came thanks to the late Dieter Weinkauff. 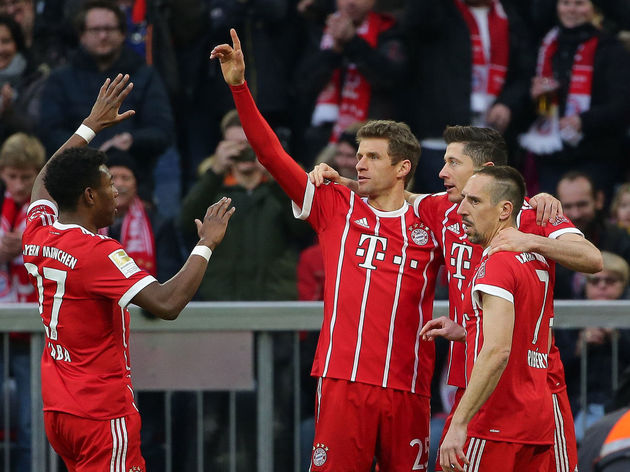 47 years after an 11-1 loss became Borussia Dortmund’s biggest ever defeat, Bayern Munich inflicted also inflicted the Black and Yellows with their second.

There were only six goals this time around, but Bayern Munich grabbed every single one, highlighting just how far behind Borussia Dortmund were under then manager Peter Stöger.

Robert Lewandowski scored half the goals with his first hat-trick against Borussia Dortmund, although the Pole had to bide his time before netting his third of the match.

Bayern Munich took a 5-0 lead into half-time, where James Rodriguez, Thomas Müller and Franck Ribéry added to Lewandowski’s two goals, with the Poland international adding his third and final goal of the game with just three minutes left on the clock. 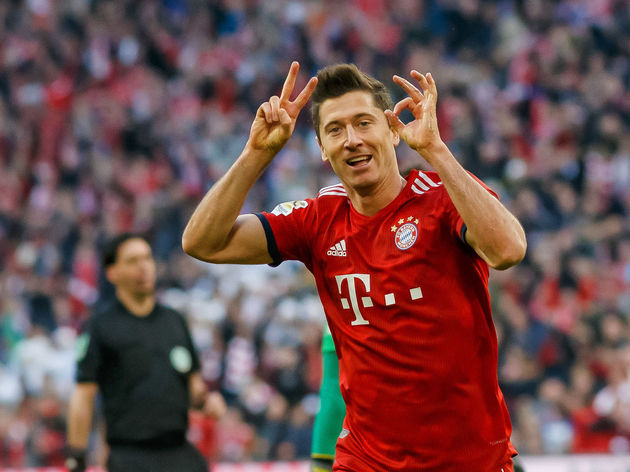 Robert Lewandowski’s only ever scored one hat-trick against Borussia Dortmund, but during Bayern Munich’s 5-0 win over die Schwarzgelben last year, the Poland international made history.

Mats Hummels, Javi Martinez and Serge Gnabry also scored in the Bundesliga’s 100th Klassiker, but Lewandowski stole the headlines after overtaking Gerd Müller as the all-time top goalscorer in games between Bayern Munich and Borussia Dortmund.

It was the game where Lewandowski scored his 200th goal in the Bundesliga, becoming just the fifth player to ever reach that milestone. 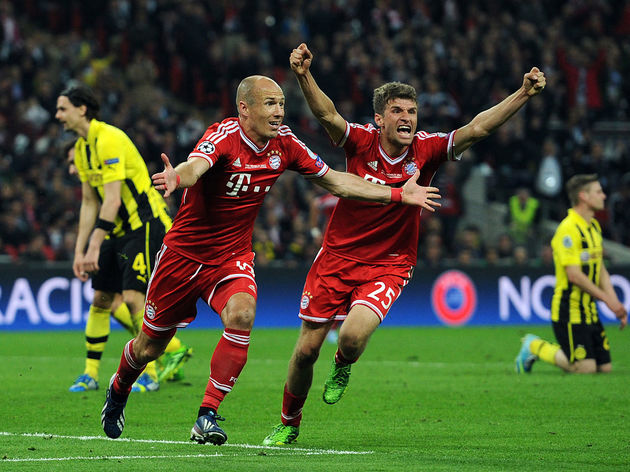 Borussia Dortmund’s double winners had another year in their legs by the time they met their old rivals in the first all-German Champions League final, but at Wembley stadium, Jürgen Klopp’s super team came up against the most successful Bayern Munich team in history.

İlkay Gündoğan had cancelled out Mario Mandžukić’s opener from the penalty spot, but the 2013 Champions League final is remembered for one, late moment where Arjen Robben immortalised himself in Bayern Munich folklore.

FC Hollywood had lost the Champions League final 12 months earlier, so when Robben rolled the ball past Roman Weidenfeller in the last minute of the match, so important that it almost happened in slow motion, you could hear the celebrations all the way from Bavaria.