Euro ’96 was not a good time for Italy. They failed to make it out of the group stage, and their 2-1 win over Russia in their opening game was a good example of their struggles. Meetings between rivals Scotland and England are usually entertaining, and the two sides’ clash at this tournament was no exception.

After an underwhelming 1-1 draw with Switzerland to kick off the tournament, England needed a moment of magic to really get things going, and they got a few of those in this one. Alan Shearer opened the scoring after the break, but the Three Lions needed to call on goalkeeper David Seaman to save a penalty and keep the dream alive. Eventual champions Germany showed everyone that they meant business with an dominant 3-0 victory over Russia in their second group stage game.

​The two sides were well matched in the first half and both created plenty of chances, and Russia easily could have taken the lead and made a game of it, but the Germans woke up after the break. Matthias Sammer opened the scoring, before a double from the inspiring Croatia were supposed to be one of the dark horses at Euro ’96, and you only needed to watch their 3-0 win over Denmark in the group stage to understand why. Was this the single greatest performance in England history?

Against one of the top sides at the tournament, England ran riot and justified all the excitement around them. Doubles from Alan Shearer and Teddy Sheringham were deserved rewards for a dominant display, which was of free-flowing excitement from start to finish.

Even from a Dutch perspective, to see Patrick Kluivert and co. push for a late goal which would see them advance on goal difference was enthralling. Even at 4-0 down, the Netherlands had to go for it, and Kluivert’s goal was enough to steer them through to the knockouts.​ On paper, this should have been rubbish. Russia weren’t good and this was the first appearance of the Czech Republic after the dissolution of Czechoslovakia – but the two sides put on an incredible show.

The Czechs raced to an early 2-0 lead under the Anfield lights, but they threw it away and allowed Russia to storm back to 3-2 with just minutes remaining. Both sides had been throwing everything at one another, but the fun wasn’t over yet.

A late moment of magic from

Speaking of worldies, here we are at the worldie of the summer.​

Czech Republic’s quarter-final against Portugal wasn’t particularly great, but the 53rd minute was one of the best of the entire summer. By the time England made it to the semi-final, the country had gone wild. Fans were constantly screaming and bouncing, and the optimism was about as high as it ever has been for the Three Lions.​

An early goal from Alan Shearer saw the excitement continue, but 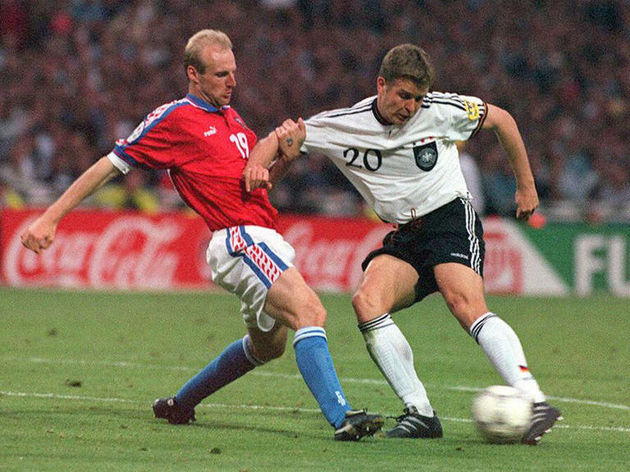 Czech Republic were the underdogs who had made it to the final. Germany were the powerhouses who were pushing for greatness. ​The story wrote itself.

So, when Patrik Berger gave the Czechs an unlikely lead shortly before the hour mark, the tension built even more. Could they actually do this? Well, no.

Oliver Bierhoff came off the bench to net an equaliser and send the game to extra time, and the towering striker was at it again to put away the golden goal and seal the trophy for Germany – the first time a tournament had ever been decided with a golden goal.