Under the guidance of first Mark Sampson, and now Phil Neville, England women have reached the semi finals ​of three consecutive major tournaments.

The 2019 World Cup attracted attention like never before for the women’s game in England, as the Lionesses changed perceptions, smashed stereotypes and missed penalties.

But a decade before, a squad of 23 had gone one step further. The Lionesses, plucky underdogs going into the tournament, reached the final of the 2009 European Championships.

They did so in dramatic fashion; scraping through the group stages by the skin of their teeth as a best third placed team. Had England not beaten Russia 3-2 in their second match of the tournament, with the winner a Kelly Smith wonder goal from the halfway line, they would not have even made it into the knock out stages, let alone the final.

The tournament didn’t get any smoother for the Lionesses, as they met hosts Finland in the quarter finals. Hope Powell’s side were leading 2-0, courtesy of goals from Eni Aluko and Fara Williams, when Finland pulled one back to ensure an anxious last 25 minutes. Straight from kick off, Aluko embarked on a mazy run up the field – probably taking inspiration from ​Keira Knightley in Bend it Like Beckham – and slotted home to restore the Lionesses’ two goal advantage.

In the last four, it took a Jill Scott header in the 116th minute to send England into the final, where they would face the six-time European champions Germany.

Captain Faye White was decked out in a fetching face mask for the occasion, after she fractured her cheek bone in the quarter finals against Finland. Unfortunately, Germany were an unbelievable side. They were a slick and athletic; a machine of sheer footballing excellence, spearheaded by the magnificent Birgit Prinz and Inka Grings.

Germany were just a class apart. The country were streaks ahead in terms of investment, resources and infrastructure, and this showed on the pitch. 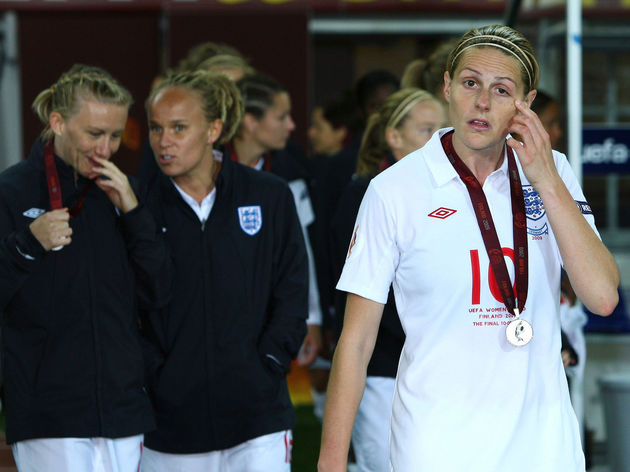 The gulf in quality eventually took its toll, as the Germany scored three times in the final 30 minutes to run out 6-2 winners.

Even Germany’s shirts looked more professional. The England players looked like they’d all forgotten their PE kits and were forced to borrow oversized spares from the cupboard.

Yet ten years on, with better funding, resources and even a properly fitted kit, England have failed to hit those heights since.

There are parallels between that side and England’s team today. Where in 2009, the experienced heads were the likes of Katie Chapman and Faye White, today Jill Scott and Steph Houghton bring the know how, and Georgia Stanway and Lauren Hemp provide the youthful fearlessness that Karen Carney and Eni Aluko possessed back then.

Facebook reminded me that 9 years ago yesterday, England reached the final of EURO 2009, beating Holland 2-1 in the semis.
The Dutch were ultra defensive (and a bit dull), but its a sign of how far both teams have come nearly ten years on. K.Smith & J.Scott scored for England. pic.twitter.com/RM7CmHY4ng

Ten years ago, England had the world class Kelly Smith at the peak of her powers. Today, Lucy Bronze lines up for the Lionesses.

But the 2009 side were blessed with that wonderful thing that any England side, regardless of gender, will not be afforded for a very long time.

A lack of expectation.

It worked wonders for Gareth Southgate’s unlikely heroes in the 2018 World Cup, as they outperformed the considerably more talented sides from the golden generation, who always appeared weighed down by the intense scrutiny of the watchful British media (although admittedly the British media didn’t choose to play Paul Scholes out wide).

England women handled pressure remarkably well at the 2019 World Cup, with the quarter final display against Norway the ultimate demonstration of how to perform on the biggest stage when the nation expects. 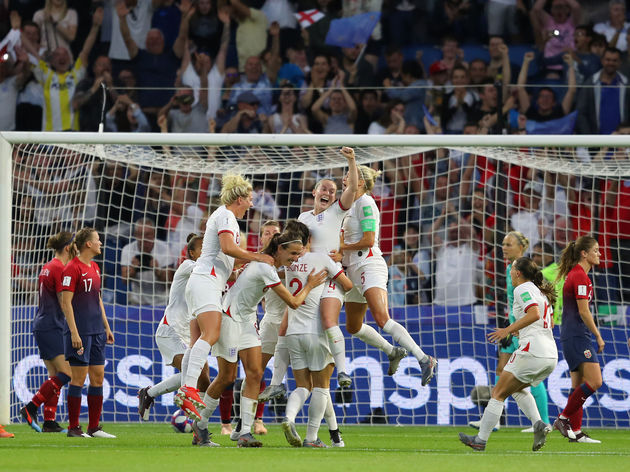 But since the summer, as the scrutiny has been cranked up, England have struggled to cope.

When they play, the shackles are on.

​Lauren Hemp’s displays at the SheBelieves Cup show just how vital it is that England somehow maintain a fearlessness while contending with the growing profile and expectation. Reaching the final of the 2009 European Championships was an astonishing achievement from a team who slipped under the radar and never received the recognition they deserved.

But if they had had to cope with a profile, substantial media coverage and recognition, would they have made the final in the first place?