Zinedine Zidane stole the show as France progressed to their second major final in two years as their number ten put on a dazzling display in the semi finals of Euro 2000.

It was Portugal who opened the scoring in the 19th minute as Nuno Gomes latched onto a loose ball, pivoting on his right foot before lashing in the opener with his left from 20 yards out, in one fluid motion. Portugal largely dominated the first half but France replied six minutes after the restart as Nicolas Anelka burst into the box, collecting a Lillian Thuram through-ball. The former Arsenal man cut it back to his replacement in north London as Thierry Henry, after steadying himself 12 yards out, swept the ball through Fernando Couto’s legs and past the helpless Vitor Baía.

The game between two sides who had lit up the tournament slowly deteriorated, becoming fragmented and bitty, going into extra-time with the score locked at 1-1.

Abel Xavier could have won it in the 90th minute but ultimately proved to be Portugal’s villain as he blocked Sylvain Wiltord’s effort in the six-yard box with his hand, after the ball had broken from Baía’s failed attempt to take it off David Trezeguet’s toes.

Zidane stepped up to effortlessly dispatch the resulting spot-kick in the 117th minute, ending the tie thanks to the now-defunct golden goal rule. 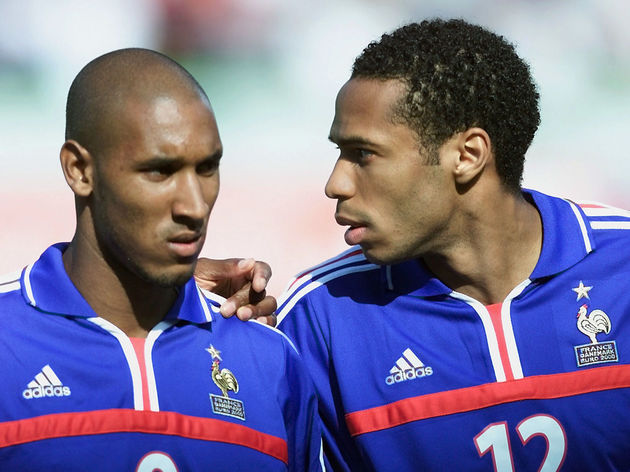 The France team at Euro 2000 was largely similar in personnel to the World Cup winning squad two years prior. Seven of the 11 who had started the final in 1998 were again in the lineup for this encounter. Laurent Blanc, who had been suspended for the final, came back while Patrick Vieira replaced Christian Karembeu.

But the most significant changes were up front. Zidane obviously remained but France had exchanged Stéphane Guivarc’h – who was cruelly mocked for his clumsiness and sluggishness in front of goal (he didn’t score once in the World Cup triumph, much like Olivier Giroud 20 years later) – for a 21-year-old Anelka while Henry came in place of Youri Djorkaeff.

Despite the minor changes, this was a new-look France, reliant upon lightning speed which terrified opposition defences. France’s opener on the night – and the majority of their strikes throughout the tournament – was created by a penetrating dart in behind, as they mercilessly exploited the mercurial rapidity of their forward line.

In his greatest tournament for France, this was arguably ​Zinedine Zidane’s finest performance of his international career. For a man who scored in two World Cup finals and single-handedly humiliated Brazil in the 2006 quarter final, that’s saying something.

France coach Roger Lemerre switched formations from a 4-2-3-1 to a 4-3-1-2 for this match, with Zidane behind the two pacy forwards of Henry and Anelka. This greatly benefitted France’s number ten who had the freedom to drift across the pitch, with a seemingly omnipresence that night as he cropped up on the right, left and through the middle.

The player of the tournament crowned his performance when he stepped up for his first ever international penalty, sweeping the ball into the top corner with just three minutes of extra time remaining before wheeling away, arm aloft in triumph. Going into the encounter, France’s plan had clearly been to do what had gotten them into the final four: cut open teams with their searing pace. Prior to the game, Lemerre identified that Portugal’s back line weren’t blessed with speed.

As Robert Pires highlighted after the game: “That’s why he wanted to inject more pace into our play. That’s why Henry and Anelka started the game. He wanted us to play down the sides because their centre backs were so strong, so good in the air.”

It seems Portugal had seen this coming as they played a much deeper backline than France’s previous opponents and did well to largely restrict Les Bleus to relying upon Zidane’s genius. Yet, Henry’s equaliser still came from Anelka’s run into the right-hand channel as speed once again proved crucial for France in the tournament.

Having been one of the most impressive sides up to the semi final, Portugal somewhat marred their campaign in the protestations of France’s late penalty. When Luis Figo’s wicked delivery from the right-hand touchline beautifully arced onto Abel Xavier’s bleached-blonde bonce in the dying minutes of normal time, the Portuguese right back must have thought his night would’ve ended in glory rather than a lengthy ban.

Xavier’s header from Figo’s free-kick produced a fine save from the ​Manchester United-bound Fabien Barthez but it would be the right back’s attempts at playing goalkeeper which would define his tournament.

In the final minutes of extra-time Wiltord pounced on a loose ball by the goal-line, just wide of Portugal’s six-yard box, driving it goal-wards only for Xavier to instinctively stick out his left hand.

The penalty was eventually awarded, though not before the Portugal team had protested so vociferously that Xavier was joined by teammates João Pinto and Nuno Gomes (who got sent off for his words with the officials) in being banned from UEFA competitions for at least six months.

Xavier didn’t take the punishment well. After the details were announced by UEFA, the then-​Everton full back retorted:

Things That Aged the Worst France, after completing a historic double of global and continental titles, went into the 2002 World Cup as favourites and with perhaps an even more potent front line.

In Henry, Trezeguet and

Oh, how the mighty had fallen.

Things That Aged the Best Admittedly Portugal also went out in the group stage at the following World Cup, but they would go on to enjoy their longest spell dining at the top table of international football.

As the so-called ‘Golden Generation’ (not only England fall into this trap of proclaiming a group of players as ‘Golden’ before they’ve achieved anything) of Luis Figo and Rui Costa matured, they were joined by the country’s greatest ever player: ​Cristiano Ronaldo.

After qualifying for three tournaments in the 20th century, Portugal were the only nation to reach at least the quarter-finals of Euro 2004, World Cup 2006 and Euro 2008. Bixente Lizarazu, while it may score highly in Scrabble, isn’t the first name to roll off the tongue when France’s great sides at the turn of the millennium are being discussed.

The former Bordeaux and Bayern Munich left back was first-choice throughout both international triumphs. Yet, unlike many of his fellow professionals post-football, Lizarazu tempered his time in the TV studio with surfing and Brazilian jiu-jitsu – and in 2009 he became the European champion in the latter. France went on to win the tournament, beating Italy in the final 2-1 after extra time in a gripping encounter which Alessandro del Piero probably should have wrapped up for the Azzurri long before the 90 minutes were up.

Much like the semi-final against Portugal, it was again the two substitutes, Trezeguet and Wiltord, who turned the tide for France in the final.

Wiltord rifled the ball past Francesco Toldo in the 93rd minute to extend proceedings before Trezeguet took a step back to leather the bouncing ball into the top corner. Robert Pires, another substitute, had created the opening after a mazy run down the left as France went all-out attack to claim the golden goal and the trophy.

Why did France perform so poorly at the following World Cup?

Why didn’t this Portugal side win anything?

Why was the ‘Golden Goal’ ever a thing?