​Despite a surprising lack of trophies and titles, Napoli remain one of the most iconic football teams in both Italy and Europe.

They may not have had the longstanding success as their Milan or Turin rivals, but the passionate Neapolitan fan base, mixed with a sprinkling of star names, has endeared Napoli to a much wider audience. While a lot of credit is due to the man pictured above, Napoli’s rise and their history is much bigger than just Diego Maradona…

A is for Aurelio De Laurentiis Despite his role in stabilising and saving a side previously destined for financial ruin, De Laurentiis is one of the most controversial owners around.

The Italian film producer was in the news earlier this season when he threatened legal action against his own players for refusing to attend a training camp he had arranged. Barrel of laughs, eh?

B is for Ottavio Bianchi

The Italian coach – aided by Maradona’s genius – oversaw the league and cup double-winning season of 1986/87, as well as the 1989 UEFA Cup success.

This period saw the rise of Napoli to the top of Italian football and ended up being the club’s most successful period ever.

C is for Nathaniel Chalobah One of those great ‘he played for them?!’ stories. The current Watford midfielder spent an underwhelming season-long loan spell in Naples back in the 2015/16 season, making just five league appearances for the club.

Hardly a club legend, but in you pop Nathaniel.

D is for Dino Zoff

The Buffon of his day, Zoff forged an impressive career in Italian football. Most well known for his 11-year spell at ​Juventus, his five-year stay at Napoli helped build both his club and international career.

E is for Edinson Cavani Another star who perhaps became more famous playing elsewhere, it was at Napoli that Uruguayan Cavani established himself as a prolific striker and star of European football.

Impressive stats of 108 goals in 134 club appearances cement his status as a Napoli great.

F is for Fernando De Napoli

Fernando De Napoli is a real player who featured for Napoli back in the 1980s and 1980s. No, this isn’t the Matrix or Inception. He really has Napoli in his surname.

The Italian midfielder amassed 176 appearances for the club between 1986 and 1992, and played his part in Napoli’s most successful era.

G is for Gennaro Gattuso The fiery former Milan midfielder and manager is currently at the helm in Naples. After a disappointing end to Carlo Ancelotti’s reign, Gattuso has been left to pick up the pieces.

It certainly won’t be boring under his leadership.

H is for Marek Hamsik The striking midfielder finished his Napoli career as one of the greatest players in the club’s history.

Leaving for Chinese side Dalian Yifang in the summer, the Slovakian exited as the highest scoring player ever for the club – no mean feat for a central midfielder.

During that iconic tournament, Naples received notoriety for its support of Argentina over Italy after Maradona’s appeal to the fans. His ‘Naples isn’t Italy’ quote sparked great uproar and political debate.

Italy were knocked out in the semi-final by Argentina, who would go on to lose the final to West Germany.

J is for Jose Callejon

Since failing to make the grade at Spanish giants Real Madrid, the right winger has become a bedrock of the Napoli side since 2013.

While perhaps outshone by the likes of Lorenzo Insigne and Dries Mertens, Callejon has consistently performed in Serie A and the Champions League.

K is for Kalidou Koulibaly The giant Senegalese defender has developed into one of the top centre backs in world football since his arrival at Napoli.

In the last few seasons in particular, the former Genk man has become highly sought after. It will be interesting to see who wins the battle for him this summer…

L is for Lorenzo Insigne.

Okay, he may be another recent star, but the current Napoli captain must make it into this list. The diminutive forward has been a crucial part of Napoli’s success over recent years, making 258 Serie A appearances and counting for his side.

Another one with a solid haircut as well.

M is for Diego Maradona

The most obvious name on the list and the greatest player in the club’s history, Maradona’s spell in Naples was anything but quiet.

While he led the side to great success on the pitch, his off-field behaviour was equally as eventful. Rumours of links to the Naples mafia as well as his struggles with drugs meant Maradona’s Napoli career came to an abrupt end.

Despite his well-documented fall, the talent of Maradona was never in question and neither has his status as hero of Napoli.

N is for Naples

Besides housing the football team, Naples is one of the most famous cities in Europe. Home to Mount Vesuvius and its history with Pompeii, Naples is a site of real cultural importance.

Oh, and pizza originated there!

For those non-Italian speakers out there, this song – meaning ‘Soldier of Love’ – is used as the Napoli official anthem. A song which describes the sadness of World War I, it is apt for the footballing battles that take place now – I guess?

P is for Paolo Cannavaro 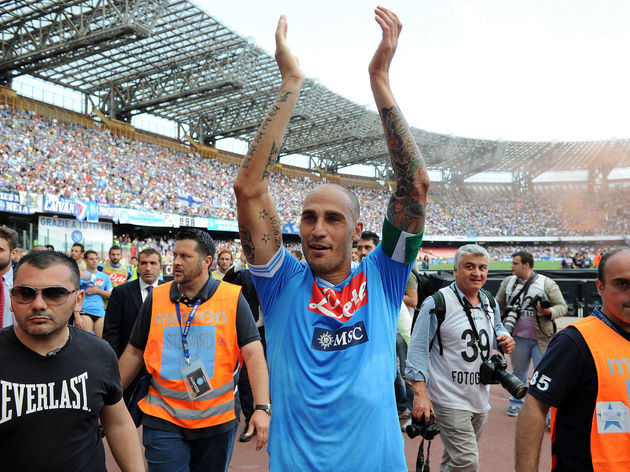 No, not that Cannavaro, but still a good player. The younger brother of World Cup-winning captain Fabio, Paolo forged a solid career in southern Italy.

Eventually captaining the side, the central defender made 238 league appearances in Serie A and helped his side qualify for the Champions League in 2011.

Q is for Quite Good

Okay, it’s a bit of a stretch. But perhaps ‘quite good’ sums up Napoli.

Despite their fame and popularity, the club have only ever won two Scuddetti and five Coppa Italia titles. When compared to the 35 league title successes of northern rivals Juventus, Napoli’s haul pales in comparison.

And sure, we could have gone with Fabio Quagliarella, but he didn’t stick around for too long.

R is for Roma The fierce Derby del Sola sees Roma and Napoli clash in the battle between central and southern Italy.

As probably the two biggest teams outside northern Italy, the rivalry is intense. With 165 meetings so far, Napoli have won 49 to Roma’s 65.

S is for Stadio San Paolo

This famous stadium has been the club’s home since 1959, and most notably hosted the 1990 World Cup meeting between Argentina and Italy.

Despite its historic nature, Ancelotti was highly critical of the state of ruin the arena had fallen into. Lucky for him, he doesn’t have to go there anymore…

This may sound bizarre, but Thomas Lipton, owner of the famous Lipton Tea company, created a cup competition for southern Italian and Sicilian football teams in 1909.

As only northern teams were allowed to participate in the early Italian championship, this cup competition was vital for Napoli, who otherwise would have been forced to play against sailors.

The Naples side won three finals against Palermo, if you were interested.

U is for UEFA Cup While it may not be the Champions League, this trophy means a lot to the people of Naples.

The wizardry of Maradona carried Napoli to victory, beating the likes of Juventus and Bayern Munich on the way to the final. In the showpiece, the side defeated Stuttgart 5-4 on aggregate to clinch the trophy, to the delight of the city.

V is for Very Beginnings

Again, a slight stretch, but it’s interesting to note that Napoli began life as

Very much a stretch here, but Napoli have hired and fired some notable managers in the last decade. The Germany international is a solid member of the Napoli squad.

However, the former Ajax man is perhaps more well known for the kind-hearted gesture of requesting the number 34 shirt at Napoli in support of former teammate Abdelhak Nouri, who recently came out of a coma.

Z is for Gianfranco Zola

There could be only one man to finish off this list: Gianfranco Zola.

Despite being much more well-known for his stint at ​Chelsea, he had a successful spell at ​Napoli as the understudy to Maradona. Zola would help the club clinch the 1989/90 Serie A title, surprisingly the only league win of his career.