Manchester City put their off-field problems behind them on Wednesday evening, comfortably beating West Ham 2-0 at the Etihad, and pouring even more misery on their relegation-threatened visitors.

Unsurprisingly, the hosts dominated early proceedings and could have taken an early lead when Gabriel Jesus rounded the goalkeeper, only to get the ball stuck under his feet, while Sergio Aguero and Kevin De Bruyne also had decent efforts on goal.

Eventually City’s dominance was rewarded when De Bruyne’s cross was met by Rodri, whose near-post header found its way beyond Lukasz Fabianski.

The second half started in much the same vein as the first, Aguero once again striking wide of the post from a tight angle minutes after the restart, while West Ham started to pose a few problems on the break. Just as the visitors began to threaten, the game was ripped from their grasp, De Bruyne rifling his effort into Fabianski’s near post following some neat link-up play with Bernardo Silva.

Jesus could have added even more gloss to the scoreline with a quarter of an hour left, but was only able to smash the ball straight at the onrushing Fabianski following De Bruyne’s gorgeous outside of the foot cross. From then on the game was played at walking speed, with the Citizens seeing off their London opponents with little difficulty, and putting a pretty dismal week behind them.

All eyes (yes, them all, there was no other football on…swear) were fixated on the current Premier League champions this Wednesday evening, with football fans across the world desperate to see how ​Manchester City would respond to the news of their potential European ban on the pitch.

The Sky Blues controlled the early stages and looked fresh going forward, but were once again guilty of wasting opportunities – ​Jesus in particular culpable of over-complicating proceedings. But the Citizens continuously and effortlessly carved open their visitors, while Aymeric Laporte’s calming presence all but nullified West Ham’s threat on the counter-attack. The Sky Blues had a swagger about them and took a deserved 1-0 lead into half time and looked untouchable throughout the first half, something that continued after the restart.

City strolled in to a two-goal lead following another moment of quality from De Bruyne, and never looked back. With a difficult trip to Leicester up next, before a Champions League clash with Real Madrid this time next week, the Sky Blues unsurprisingly took their foot off the gas, with West Ham causing them next to no problems.

After a week of disappointment and controversy, Guardiola will be glad to have gotten through this one with little difficulty, or drama. 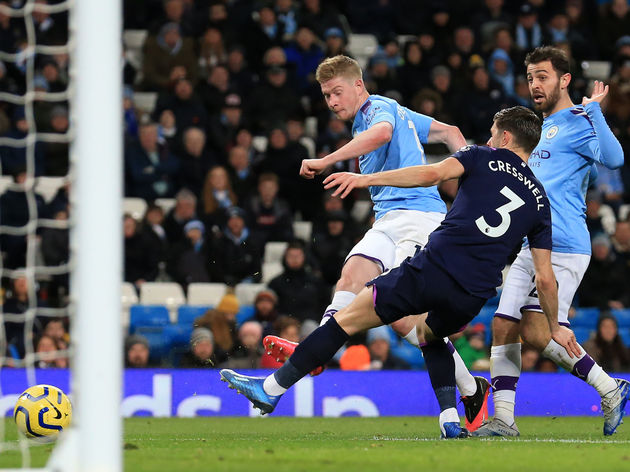 Another game, another goal, another assist.

Once again, ​De Bruyne was the architect of City’s relentless dominance, controlling the game with his incredible passing range and technical ability. The match was well and truly played at the Belgian’s pace, and he was pivotal in both the goals that led to City having such a comfortable evening.

16 Premier League assists for the season speaks for itself, with De Bruyne showcasing yet again why he is the Sky Blues’ most important asset.

I tell you what.. De Bruyne may almost be as good as Grealish, lads having a great game

Wow. Kevin De Bruyne best in the league without a doubt  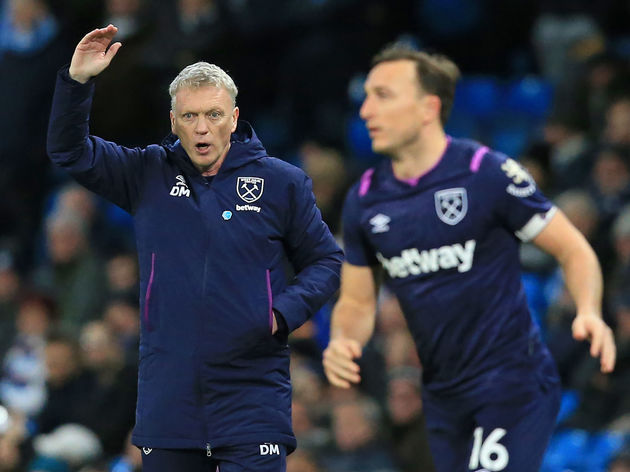 The real issue for Moyes’ side thereafter was where the goals were going to come from, with West Ham looking toothless on the counter-attack. For all Michail Antonio’s hard work, his lack of support up top meant City repeatedly won possession back with relative ease – time and time again.

West Ham had fared better at the beginning of the second half, but Man City’s inevitable second goal put the game beyond the visitors, who were unable to find any rhythm following De Bruyne’s strike. While the Irons wouldn’t have expected to pick up any points at the Etihad, they will be disappointed with just how easy they made life for their opponents.

West Ham are in serious trouble

Well, only a trip to Anfield next, eh? While it was another evening to forget for West Ham, one shining light was the performance of Declan Rice, who once again proved he can mix it with the best of them.

Not only did the midfielder work his socks off, he was responsible for breaking up a number of City attacking moves, as well as spearheading the majority of the Hammers’ counter-attacks.

Declan Rice is far too good for West Ham – great player who is amongst colleagues who are levels below him in both talent and impact within games. Shows how much of an utmost professional he is as he is still the most committed player for West Ham despite this.

I feel sorry for people who think Declan Rice isn’t very good. What a player man he deserves better than this.

Manchester City are back in ​Premier League action again this Saturday, travelling to the King Power Stadium to take on Leicester. Meanwhile, West Ham continue their fight for survival with a tricky trip to runaway table-toppers Liverpool next Monday evening.​