Despite being the third La Liga club you’d think of, Atlético Madrid have established themselves as a Spanish powerhouse over the past 50 years..

Their La Liga and Copa del Rey successes in the late 1960s arguably have been eclipsed by their recent UEFA Europa League triumphs as well as more domestic success in the 2010s.

Hence, it is a difficult task to pick out their ten best players who helped the club win these trophies, but 90min will give it a go. Signed from Real Sociedad for €30m, it was at Atlético that Antoine Griezmann became a globally recognised star. The Frenchman used his frightening pace and finishing skills to deadly effect, and helped the club win the UEFA Europa League in 2018 with his six goals.

He ended up playing 257 games for Los Rojiblancos and scored 133 goals, making him the fifth-highest scorer in their history before moving to ​Barcelona.

Before David Villa and co., there was Adelardo Rodriguez. Despite only having the height of 5’8, he made up for it with his sharp skills and eye for goal, scoring 113 goals throughout his time for Atlético. He enjoyed much success while at the club, winning La Liga three times and the Copa del Rey five times during the late 1960s and early 1970s.

He played 551 games in total, making him the all-time appearance maker for Los Rojiblancos. His full name is Jorge Resurrección Merodio but you probably know him as Koke. Having made 442 appearances for Atlético, he is a rare one-club man that grew up and developed in Atlético’s academy before making his debut in 2009.

Being versatile enough to play anywhere in midfield, the Spanish international has created plenty of goals that helped them win ​La Liga, the Copa del Rey and two UEFA Europa Leagues, remarkably all in the last decade. Now given the captaincy, he will look to continue winning trophies during a hugely successful period in the club’s history. 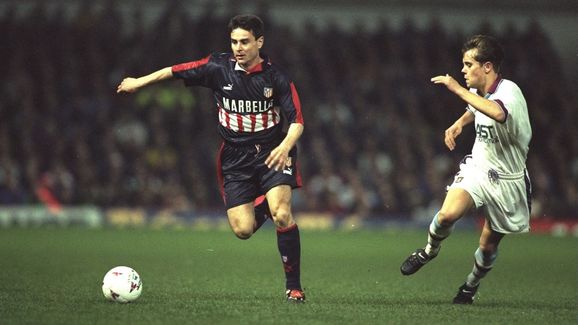 Born in Madrid, Carlos Aguilera made his debut at the Estadio Vicente Calderón in 1988 and helped the club achieve back-to-back Copa del Rey cup successes, before departing for CD Tenerife in 1993.

He returned three years later to Los Colchoneros, and remained at the club despite relegation from La Liga, playing out the rest of his career in the capital and played a total of 454 games, placing him as the fourth-highest all-time appearance maker for Atlético. Signed from Sevilla, Diego Simeone first made his name for Atlético as a tough-tackling, combative midfielder. He was a key cog in the team that won both La Liga and the Copa del Rey in the 1995/96 season before leaving for ​Inter Milan in 1997.

He returned in 2003 for a brief second spell at the club, spending two years before departing once more. Yet today, he is now more known for his managerial tenure at Los Rojiblancos, continuing to lead the club to huge success. Juan Francisco Torres Belén, or simply known as Juanfran, has become one of the best right-backs that has played for Atlético in their history. Signed for a small fee of just over €4m, the Spaniard became a regular fixture and played a key part in helping Los Colchoneros win the La Liga in 2014, as well as two UEFA Europa Leagues in the last decade.

Dependable and defensively solid throughout, he left the Madrid side having played 355 games during his eight years playing for the club. While his teammates Koke and Diego Costa took the headlines for their assists and goals, it was Gabi who was the heart of the La Liga-winning Atlético side of 2013/14. The midfielder added bite in his tackling that resembled his manager Diego Simeone, and made it possible for his attackers to thrive.

The captain would not only lift the La Liga trophy, but also the UEFA Europa League trophy twice as well as the Copa del Rey. He made 413 appearances in total for Los Rojiblancos and embedded himself into club history.

Before becoming a Euros-winning manager, Luis Aragonés was a successful centre-midfielder for Atlético. The man, who was nicknamed ‘Zapatones’, translated as ‘Big Boots’ for his free-kick abilities, aided the Madrid side to two Copa del Rey trophies and three La Ligas during his ten years. His importance in the 1969/70 La Liga win was emphasised by being co-awarded the Pichichi Trophy as the joint-top scorer that season.

His legacy is very much intact, as he is still the all-time top scorer with 172 goals for the club. An Atlético player since joining their academy in 1995 as an 11-year-old boy, Fernando Torres became the local hero of Los Colchoneros. He scored 83 goals in the six years he spent at the club, helping the side gain promotion back to La Liga in 2002, before moving to ​Premier League team ​Liverpool in 2007.

He returned to his boyhood club in 2015, first on a loan deal from Italian side ​AC Milan, and then on a permanent basis in the summer of 2016. While his impact was not as profound as it had been beforehand, he did win the UEFA Europa League in 2018. Overall he scored 121 goals for the Madrid club, placing him in the top-six of their all-time goal scorers. One of the best centre-backs of the modern era, Diego Godin was a crucial part of Atlético’s trophy-laden 2010s. The Uruguayan epitomised the grit and dogged defending that was a mainstay of Atlético’s effective gameplay in the last decade.

His performances were well-rewarded as he helped the club lift two UEFA Europa League trophies as well as their La Liga title win in 2014.