Juventus squandered the opportunity to go six points clear at the top of Serie A, as goals from Piotr Zielinski and Lorenzo Insigne inflicted a shock defeat on the defending champions, and lit a fire under Napoli’s dwindling season.

An attritional first half yielded precious little in the way of clear-cut chances, an Arkadiusz Milik header at one end and a poor Cristiano Ronaldo effort at the other the closest either side would come to opening the scoring. In a sense the quiet start to proceedings suited both sides, however. ​Juventus were content to control possession, seemingly confident the chances would come, while ​Napoli were happy to sit deep and try their hand at denying them that luxury.

The visitors began to zip the ball about with a bit more urgency as the second half kicked things into second gear, and they did have the ball in the net through Ronaldo, though it was rightly chopped off for an earlier offside call on Gonzalo Higuain, enduring a hostile reception upon his return to Naples.

After the evening’s pantomime villain had an effort well-saved by Alex Meret, however, it was the home side who took a near-unthinkable lead. Zielinski watched Wojciech Szczesny save a powerful effort from Insigne, and timing his run to perfection, the Poland midfielder arrived at the right time to force the ball over the line and send Stadio San Paolo into raptures. Juventus failed to respond, in truth, a raft of substitutions and tactical changes leaving them disoriented and disjointed – something of which Napoli took full advantage of.

The game was finished off as a contest, or so it seemed, on 86 minutes, when the superb Insigne arrived at the back post to drive José Callejon’s cross into the ground and into the net.

Ronaldo did manage to pull one back for the visitors thanks to some suspect goalkeeping from Meret, but the keeper made up for it when he clutched Higuain’s effort out the air and collapsed on top of it to make sure of the points deep into stoppage time.

Going in off the back of three successive ​Serie A defeats and four on the bounce at home, Napoli could hardly have picked a less convenient opponent that a highly-functional Juve side against which to try and end that run. They had never lost five on the bounce at home; it would require a pretty big performance from them, then, to avoid making history.

Setting up to defend with everything they have, they did just that. They gave their esteemed opposition no quarter in the final third, an admirable performance by a side whose young manager found himself under severe pressure coming in. They defended crosses with a determination that suggested their lives depended on it, while Fabian Ruiz and Diego Demme frequently did the hard yards to cut off the creative supply from the likes of Paulo Dybala in central positions.

Not long ago when Napoli were coached by the man currently in the Juventus hot-seat, and this fixture saw Italy’s two best sides go head to head. Now, there was supposed to be a chasm between them that would signify how far Napoli had fallen since the Maurizio Sarri era at the club – but that was nowhere to be seen.

It’s perhaps too early to call it a turning point for Gennaro Gattuso’s side, but as springboards go, they won’t get a more effective one this season. You feel, then, that they have to make it count.

It would be easy to give this one to the industrious Zielinski, but it was Lorenzo Insigne who provided the hosts’ most consistent threat – and what a considerable threat it was. 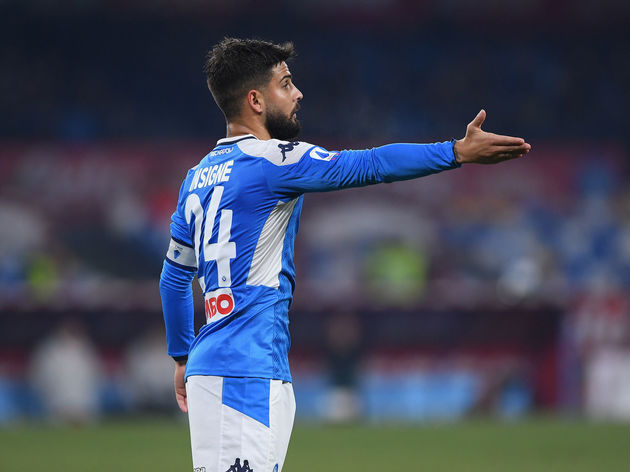 Taking advantage of the considerable space available in behind Juan Cuadrado, the winger made his opposing full-back’s life a misery on the counter, and the infallible out-ball he offered was invaluable as his side came under the cosh late on. He had the composure to put the game to bed when it mattered, and if his side are to put a dreadful start to bed and start climbing the table, then he will have a huge part to play.

Juve went into this one with the pressure comparably off. Inter’s previously-unrelenting pursuit had eased up somewhat, their most recent stumble coming against Cagliari earlier on Sunday, so Maurizio Sarri’s men went in aware of the three-point cushion between the sides – but nonetheless keen to stretch that even further.

They might have been keen to do so, but their performance failed to show it. They were slow, lethargic, at times complacent, and nowhere near the standard required. They perhaps took their struggling hosts for granted, and were punished accordingly. In the end, it’s not necessarily disaster, perhaps just a wake-up call for Sarri’s men, but they will know they require a serious improvement if they are to fend off Inter in the weeks and months ahead. It was a poor, poor evening for Juventus, but one man who didn’t let his head drop was midfield maestro Rodrigo Bentancur.

The youngster was hoisted out of position by Miralem Pjanic’s injury early in the second half, charged with covering the defence at the base of midfield, but he performed his duties admirably – if failing to affect the game in an attacking sense.

Napoli travel to Fiorentina next Monday, while Juventus host Fiorentina a day earlier looking to get things back on track.