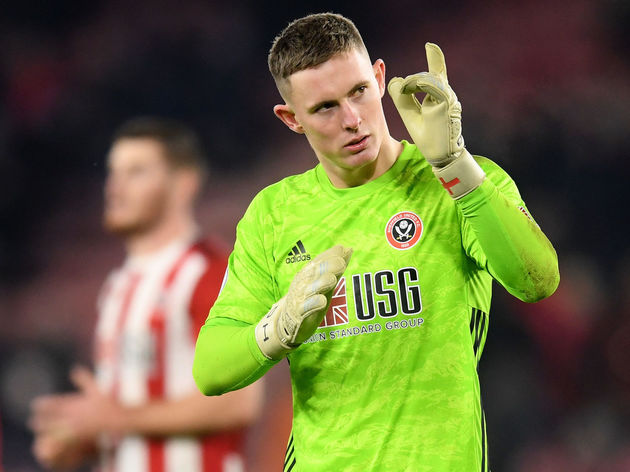 Sheffield United remain firmly in the top half beyond the halfway stage of the season, with only runaway leaders Liverpool conceding fewer goals so far.

The Blades were only narrowly beaten by Manchester City in their last outing on Tuesday night, with Henderson saving a Gabriel Jesus penalty and making a number of other fine stops. There is now talk of not just making it into England’s Euro 2020 squad, but replacing Jordan Pickford as number one.

After the final whistle Blades manager Chris Wilder confirmed that the club is already in talks ahead of next season over another potential loan deal to have Henderson return to Sheffield for a third consecutive year if his parent club will agree to it.

“If there is a decision for Manchester United for him to come out to us for another year we will gladly take that up,” Wilder is quoted as saying by the Daily Mirror.

“We’ve already started talking with them, but he’s their player and that decision will be taken on behalf of Manchester United about the player. He’s been outstanding for us.”

The Old Trafford club clearly value Henderson because he signed a new contract until 2022, with the option of a further year, immediately prior to rejoining Sheffield United last summer.

Whether his parent club see a long-term future for Henderson in Manchester is something they will have to decide. Were he not to return to Bramall Lane next season in order to fight for a place at United he would have the huge task of dislodging David de Gea as number one.

The Spaniard has not been in the best form over the last 12 months but is still generally regarded as being among the top goalkeepers in the world and is under contract for a year longer than Henderson’s latest Old Trafford deal. Wilder also suggested post-match that Henderson is not prepared to warm the bench as a back-up, commenting, “He wants to play first team football. Maybe I shouldn’t be saying this, but I’m not so sure he’ll play backup to anybody. Just the character of the boy.”

Another loan at Sheffield United, who have already done enough to preserve their Premier League status into a second season, could therefore be in the best interest of all parties.

But what of any long-term future? Loans are okay for young players and he has almost certainly benefitted more from having the consistency of back-to-back spells at the same club, but it will not be an ideal situation for him for much longer.

If they see no way he will be their number one within the next couple of years, which seems unlikely in all reality, Manchester United could always look to cash in while Henderson is a hot commodity. And should he actually play at Euro 2020, his value could rise even further.

The sad part for Sheffield United is that a permanent deal could well already eclipse their budget, especially if Jordan Pickford’s £25m move from Sunderland to Everton in 2017 is a yardstick to measure the market value of English goalkeepers in the Premier League.