​On the whole, Liverpool were not best pleased with their 2-2 draw with Shrewsbury Town in the FA Cup.

A youthful Liverpool side threw away a two-goal lead and must now contend with a replay during the winter break – although Jürgen Klopp has already confirmed that ​no senior players will feature in that game. 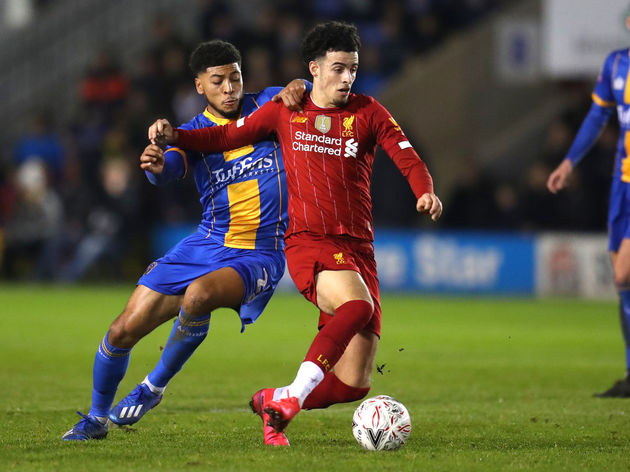 One player who will likely feature in that replay is midfielder Curtis Jones, who netted ​Liverpool’s opening goal against Shrewsbury. Not only did he score, but he actually broke a club record with that goal.

As noted by ​Opta, Jones is the first teenager to score in consecutive appearances for the Reds since ​Raheem Sterling did so in April 2014.

His last appearance for the club came in the third round of the FA Cup, when Jones netted a stunning strike to earn his side a 1-0 win over Merseyside rivals ​Everton.

Not only that, but at 18 years and 361 days old, Jones was actually younger than Sterling, who was 19 years and 133 days old when he managed the feat.

It was Jones’ sixth appearance in all competitions for Liverpool’s senior side, having made his ​Premier League debut for the Reds earlier this season in a 3-0 win over ​Bournemouth, and the 18-year-old is on the cusp of a full breakthrough.

Back in December, Klopp admitted that he would be ​happy to promote Jones to his starting lineup permanently, alongside Rhian Brewster, Harvey Elliott, Neco Williams and Caoimhin Kelleher. The boss believes that developing young players is one of the most important aspects of football, adding that each of his academy stars are improving with each passing day, so it seems as though it could be just a matter of time before Jones breaks through permanently.

With the likes of Alex Oxlade-Chamberlain, Georginio Wijnaldum, Naby Keïta and Jordan Henderson ahead of him in the pecking order, it will not be easy for Jones to cement a place in the team. However, if he continues to impress, Klopp may soon have no choice but to play him.