Not only did the Blues go 3-0 up within the first 20 minutes of the game, but new singing Sam Kerr also managed to net her first goal in a Chelsea shirt, saving her milestone moment for the travelling fans at Meadow Park.

It may seem strange to have to wait four games for one of the best strikers in the world to net for her new club, but it’s not just goals that Kerr brings to the table – and her newly formed partnership with fellow striker Beth England has become one of the most exciting aspects for the club since her arrival. 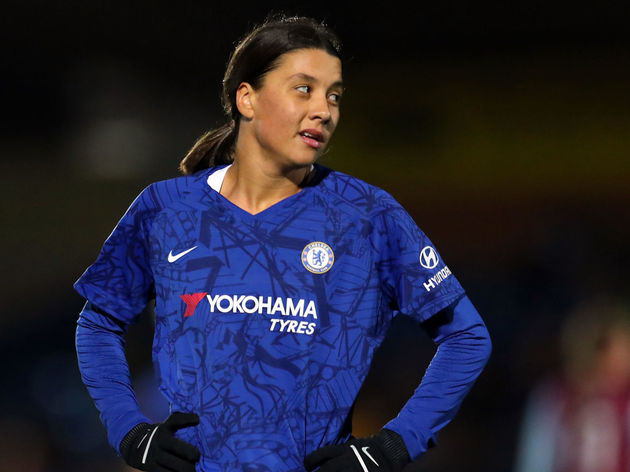 When Kerr signed for ​Chelsea back in November, there was speculation surrounding England’s place within the squad, especially with the 25-year-old often working as a lone striker under Hayes.

After all, bringing in a world-class striker alongside a forward who is just discovering her form, would suggest that England would be the one stepping aside. Fortunately for the supporters, a promising partnership has blossomed between the two talented players, giving Hayes no choice but to start the pair together.

We first caught a glimpse of this exciting partnership in Kerr’s first game in the WSL, when the Blues took on ​Reading at Kingsmeadow. Despite the Australian failing to find the back of the net, it was her link-up play with England which made her debut a success, providing an assist for the English star with a backheeled pass.

Kerr was constantly passing to England in dangerous areas – selflessly finding her teammate when she was in a better scoring position. She was also directly involved in Guro Reiten’s superb goal, as well as the sending off for Grace Moloney in the first half of the game, creating pressure for the Reading keeper upon entering the penalty area. Despite the Chelsea boss admitting that Kerr was ‘rusty’ in her first ever WSL fixture, she praised the pair on how they worked together, hinting at a possible future partnership.

Since that game, Hayes has experimented with formations to get the best out of the two stars, with Kerr sometimes going out on the right wing in a 4-2-3-1 or more recently, playing alongside England in a 4-1-2-1-2 which worked excellently against the Gunners.

The reason why this partnership works so well – and why Hayes can start both strikers without risk of the other missing out – is simply because Kerr isn’t just useful at scoring goals, she’s also excellent at creating chances. She can set up assists and play on the wings if needed, making her an important addition to this current Chelsea side.

With England’s incredible performances this season, conjuring up ten league goals and three assists already this campaign, it would be impossible for Hayes to drop her number nine – and her fabulous goal against Arsenal proves just how exceptionally talented she is.

Throughout the game, both forwards were able to stand their ground as they waited for crosses into the box, passed to each other in crucial areas and essentially tore the ​Gunners apart.

It’s a promising, exciting and somewhat frightening partnership that is developing between these two players. Netting four against Arsenal isn’t a common theme – but we bet it has something to do with including both Kerr and England in your starting XI.