​Milan’s stuttering season continued on Sunday afternoon as the hosts were held to a goalless draw by Sassuolo on the club’s 120th birthday.

Milan thought they’d taken the lead when Theo Hernandez rifled home from the edge of the box, but the goal was disallowed by VAR due to a handball in the buildup by Franck Kessie. Milan continued to pin Sassuolo back, and the introduction of Lucas Paqueta stirred the hosts into life. However, 38-year-old goalkeeper Gianluca Pegolo pulled off a string of great saves for the visitors, and the Italian also did excellently to deny Giacomo Bonaventura from close range.

Substitute Rafael Leao almost gave Milan a late lead with a curling effort which crashed against the underside of the bar and bounced clear, and the Portuguese star then clipped the post with a good long-range drive.

But Milan ultimately failed to break down their stubborn opposition, and the point leaves I Rossoneri languishing in tenth place in Serie A.

It was supposed to be a day of celebration at San Siro as ​Milan celebrated their 120th birthday, and there were a host of Rossoneri legends in attendance for their match against Sassuolo. In terms of the football however, there was very little to cheer for Milan supporters.

The players did not lack effort, and they created some excellent openings, but the goalless draw created a very toxic atmosphere in the stadium. 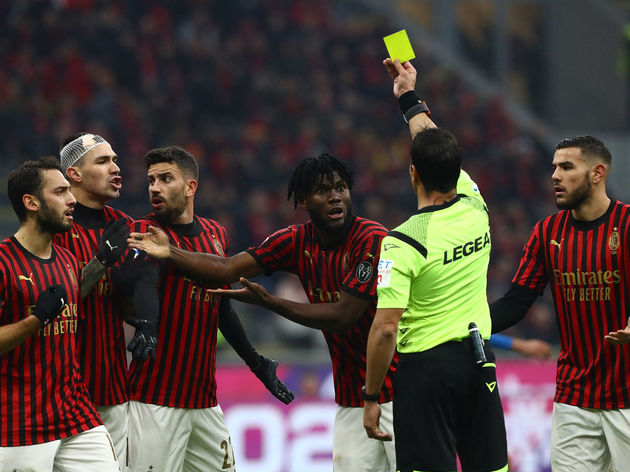 An air of frustration rang around the ground at every misplaced pass or wayward shot on goal, and the team visibly shrank in confidence as the game continued. Players were booed and jeered when substituted, as the relationship between squad and supporters drastically detonated.

Stefano Pioli has improved the situation at Milan since he replaced Marco Giampaolo, but there is still plenty of work to be done if the club are to reach the heights that their legends achieved all those years ago.

STAR PLAYER – €20m doesn’t get you a lot in today’s transfer market, but it handed Milan possibly the best left-back in the league when they splashed the cash on ​Real Madrid star Theo Hernandez.

The French defender possesses bags of energy up and down the left flank, and Milan’s best moments at the back – and offensively – came from the dynamic Hernandez. The 22-year-old thought he’d opened the scoring when he crashed home a fierce effort from the edge of the box, but the goal was cruelly snatched away from him due to a handball earlier in the move.

But Hernandez continued to drive his side forward with blistering pace and dangerous dribbling, even as those around him began to flag and fade.

The only negative to Hernandez’s performance is that he picked up a yellow card, which means he’s suspended for his side’s crucial trip to Atalanta next weekend.

Milan face one of the toughest matches of the season next Sunday, when they travel to Bergamo to take on high-flying Atalanta.

Sassuolo face a midweek trip to the revived Brescia on Wednesday night, before they welcome ​Napoli to the