When the 2010s arrived, Juventus were just another Italian team. They had enjoyed years of dominance, but that was long gone.

Having finished seventh in both the 2009/10 and 2010/11 campaigns, fans of the Bianconeri had almost forgotten what it felt like to be feared. Inter and AC Milan were the superpowers in the Serie A at that time, so Juventus needed something drastic to save their reputation.

Luigi Delneri was sacked as manager and replaced by former captain Antonio Conte who, up until that point, had made very little impact on top-flight football. In fact, his greatest achievements had been earning promotion from the Serie B, so it was certainly a bold move. The risk was huge, but the reward turned out to be even greater as Conte led his side to back to the summit of the league table with a stunning unbeaten season.

Conte completely overhauled everything at the club. Their long-ball tactics had been disposed of, and in came a high-intensity, possession-oriented style of football, and he proved to be willing to switch between formations.

Beginning with a 4-2-4, Conte did not hesitate to switch to either a 3-5-2 or 4-3-3, depending on the opposition. What made the boss so good was his desire to study each opponent in great depth, in order to figure out how to exploit their weaknesses.

However, he could not do it on his own. Conte needed a whole host of new signings to put his many plans into action, and the ​Juventus board were happy to oblige as they saw just how much work this team needed to improve. The midfield and attack were both completely overhauled, but the defence remained largely the same. Goalkeeper Gianluigi Buffon was shielded by Leonardo Bonucci, Andrea Barzagli and Giorgio Chiellini – a back line which would soon go down in history as one of the most dominant of all time.

That’s where the stability stopped. In midfield, Juventus added key pieces like Stephan Lichtsteiner and Arturo Vidal, but the signing of the season was undoubtedly the free transfer which brought Andrea Pirlo in from ​AC Milan.

Pirlo’s metronomic style of passing gave Juventus the kind of dynamism which they had been sorely lacking. He was happy to sit at the base of the midfield and spray passes all over, and there was not a defender on the planet who knew how to stop him.

His delicate touch, combined with the brute force of Vidal, gave Juventus’ midfield a little bit of everything – and let’s not forget about Claudio Marchisio. Whatever the task at hand, Conte’s side had the personnel to rise to the challenge. Perhaps because of this lack of fire power, Juventus were not seen as title contenders during the summer. However, all that changed in October when Conte’s men stormed to a 2-0 win over Milan, proving that they had what it takes to hang with the big boys.

While the team were still getting to know each other, Juventus laboured to a number of frustrating draws, and they were even seven points behind Milan later in October. They needed a turning point, and that came in the shape of a 2-1 victory over Fiorentina.

A spirited performance lit a fire under the squad, who started to turn those draws into victories over the coming weeks. Unsurprisingly, they found their way to the top of the table.

They didn’t score many goals, but they netted just enough. After all, when your defence is so strong, you only really need to score once to win games.

People quickly realised that Juventus were the real deal. They earned plenty of praise from fans and rivals alike, but that was always something Conte sought to avoid. The spotlight was seen as a negative.

To make sure his players stayed focused, Conte gave them this passionate training-ground speech: “People are flooding us with praise right now, but that sends shivers through me. Why? Because I have fear, I have fear that someone here will start to relax. There is applause and a consensus, but what is the reality?

“The reality is the pitch, the reality is sweat, the reality is sacrifice. That is what has led us to this point of the championship and we still haven’ t done anything yet. Let’s look at who we have in front of us now because we are mature enough to fight until the very end. As I said before, they [Milan] will have to spit blood until the last game.” 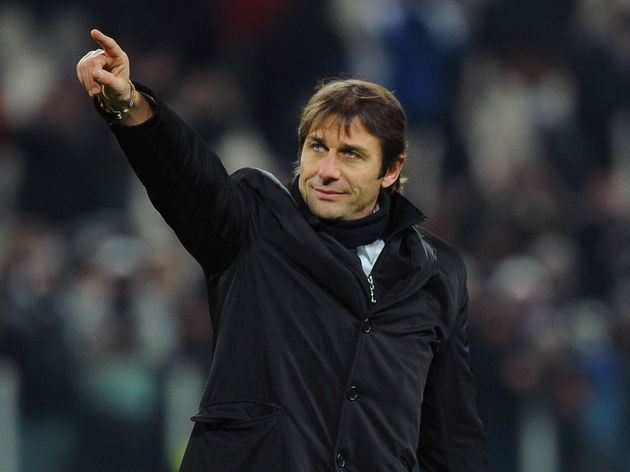 A run of six draws from seven games between February and March 2012 looked to have opened the door for Milan, who clawed their way back to first place as a result of Juventus’ frailties. But they still hadn’t lost.

With 11 games to go, Milan were top and Juventus were in miserable form. It looked like the Bianconeri’s wait for glory would have to go on.

Conte, however, had not seen the script. He led his side on a run of eight consecutive wins, and Milan just could not keep up. Advantage Juventus.

A 1-1 draw against Lecce brought that run to the end, but Juventus were still unbeaten. There were two games to go – could Juventus really go the entire season without losing?

They managed a comfortable 2-0 win over Cagliari in the penultimate game, but the fun came over in Milan. Inter had beaten their rivals 4-2, meaning AC Milan could no longer catch Juventus. The Serie A title was theirs once more.

However, there was still plenty of business to attend to. Firstly, only Atalanta stood between Juventus and an unbeaten campaign, while there was also the small matter of legendary forward Alessandro Del Piero’s final league match for the club.

In what felt like an act of fate, Del Piero shone against Atalanta. He netted a stunning goal to steer Juventus to a 3-1 win, ensuring that they would not taste defeat for the entire season. It was one of the most emotional moments in club history.

The positivity came under threat when ​Napoli picked up a 2-0 win over Juventus in the final of the Coppa Italia, but that was not important. Juventus were Italy’s biggest club once again, and they had finally got their hands back on the league title.

From start to finish, this Juventus side were close to perfect. To think that they achieved all this success without a high-level forward is astounding. The three-man defence was impenetrable, while the versatile midfield was the stuff of dreams. They had pace, passing, power and even a goalscoring touch, and there was nobody who knew how to deal with them.

You don’t go unbeaten for an entire season unless you’re the real deal, and that’s exactly what this Juventus team was.