Just a quick disclaimer: I don’t want anyone moaning ‘How are you praising him after two games against Montenegro and Kosovo?’. My huge admiration for Harry Winks started long before his two impressive performances during the international break.

Winks is a classy footballer.

Wink’s best position is not as a number six. Watching ​Spurs this season has been painful. They are a shadow of their old selves. But one thing that has been bothering me is where Winks has been playing.

Mauricio Pochettino started the season using a diamond formation, and the 23-year-old was utilised as the deepest midfielder – at the base of the diamond.

You can see why Pochettino chose to do that. Winks is able to dictate play from a deep position, and it allows other players like Tanguy Ndombele and Moussa Sissoko to be unleashed.

But why can’t Winks be unleashed? We’ll come back to this in a bit. He is capable of playing as a ‘six’. But more often that not – as we have seen this season – teams will run through midfield and through him due to his lack of physicality and defensive ability. This is one reason why the Lilywhites have shipped so many goals this campaign.

When this happens, Spurs fans are quick to jump on his back. Honestly, I have heard ‘Winks should have stopped that’ and ‘all he can do is pass backwards and sideways’ too much this season.

Get off the damn bandwagon and just think about it. Maybe it’s because he doesn’t have the best defensive attributes, and in a deeper position, he isn’t able to dictate play as well he would like. Especially baring in mind that all the players in front of him are moving at a snail’s pace right now. Even if he wants to pass the ball forward and progress play, there’s just no intensity in front of him. It’s hard to stand out when the whole team is playing like a pub side.

I can already hear the Chelsea fans screaming ‘JORGINHO PLAYS AS A ‘SIX’ AND DOESN’T  HAVE TYPICAL HOLDING MIDFIELD ATTRIBUTES, LOOK HOW GOOD HE IS’.

Jorginho has lively, bustling players making numerous runs ahead of him. He has a plethora of options to pass to. But defensively? Oh boy. Conceded four against Manchester United, four against Ajax, two against Norwich, Sheffield United, Wolves and Burnley. Not to mention that they have kept just four clean sheets in 19 games this season – which came at home against Newcastle, Brighton, Crystal Palace and extremely fortunately away at Ajax.

Trust me, if N’Golo Kante isn’t next to him, Jorginho will continue get exposed defensively and Chelsea will leak goals. Like Jorginho, Winks can do well as the deepest midfielder against the weaker teams, but only if the players ahead of him are playing well. Also, playing him as a ‘six’ allows the manager to get in players who are normally seen as more attacking. But again, why can’t Winks be seen as one of these more advanced midfielders?

This brings us back to unleashing Harry Winks.

He has been nicknamed ‘the little Iniesta’, and more recently his old coach Russell Small said he has similar attributes to Zinedine Zidane.

No, we aren’t saying he is as good as that pair. But in fact, his style of play is similar to Iniesta and Zidane. Correct me if I’m wrong, but neither played as the deepest lying midfielder. Zidane was a creative midfielder, while Iniesta was one of two ‘eights’, with Sergio Busquets sitting behind him.

I’m not claiming that Winks is a number ten, because he’s not. I’m not saying he shouldn’t drop deep and sit, because he should and will have to for the sake of the team at times. But he needs to play with some sort of licence to get forward.

That is the position where he flourished against Kosovo.

But it was just Kosovo. The game that stands out was his majestic performance in a 1-1 draw at the Santiago Bernabeu. Ask any Spurs fan about this game and they will immediately think of Winks. He was utterly phenomenal, regularly spraying magnificent cross-field passes to the wing backs. He made driving runs through midfield that were timed perfectly, while also opting to sit back and make little niggling tackles.

He left Luka Modric in his wake.

How did Spurs line up that day? Three at the back with ​Eric Dier dropping from defence into midfield and back again. Although Winks had to sit on the day – it’s against Madrid after all – he had licence to push on at times, with Sissoko covering next to him. In the reverse fixture at Wembley, he was a class act as they ran out 3-1 victors. Dier partnered him as they played three at the back again.

In both games against ​Dortmund in which they won 3-0 and 1-0, Spurs played a three at the back and Sissoko played next to Winks.

See the common theme emerging? He plays best with protection around him and a licence to dictate and go forward. Playing as the deepest midfielder is just plain wrong with the ability he possesses. 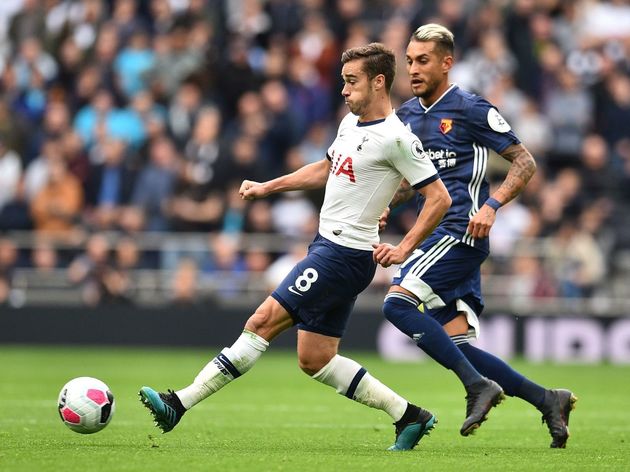 A more recent example was this season against ​Arsenal at the Emirates. That game was an utter shambles, with both teams defending with a serious lack of respect for any legendary defenders watching at home on television. They probably cried themselves to sleep that night.

But in the midst of what was a calamitous display, Winks shone brightest, driving through midfield and forcing the initiative in the final third. Who produced a superb piece of magic on the left wing to set up a penalty for ​Harry Kane to score? Winks.

As well as that, he worked so hard all game and constantly got back into a deeper position to try and restore some sort of defensive logic to the game. It was a great performance from Winks in a poor team display, as he played in what was essentially a free role. Moving Winks forward may not bring Spurs back to their best. In fact, it probably won’t. There’s a lot of other work to do before they get near their best again.

But moving him into a more advanced position and playing a natural holding midfielder either next to him or behind him will improve Spurs’ performances. Ndombele won’t be sacrificed for the Englishman, but Sissoko should be. Winks is by far a better and more all-round player than Sissoko.

So Spurs fans, lay off one of your more dedicated, hard-working and better players. Jumping on to social media to lay into him while the rest of the team are performing poorly isn’t the answer. Pochettino must find a way to get the best out of Winks and the rest of the team.

One thing is for certain, though: Tottenham Hotspur have 99 problems, but Harry Winks ain’t one.