In among all the chaos that has ensued as a result of a single managerial appointment, there was actually a full set of international fixtures taking place that either confirmed a spot in Euro 2020, consigned some nations to the play-offs, or downright meant nothing.

Fear not, though. No matter whether the fixtures were dead rubbers, of grave importance or flew under the radar, there were plenty of talking points to unearth from the latest break in domestic football. 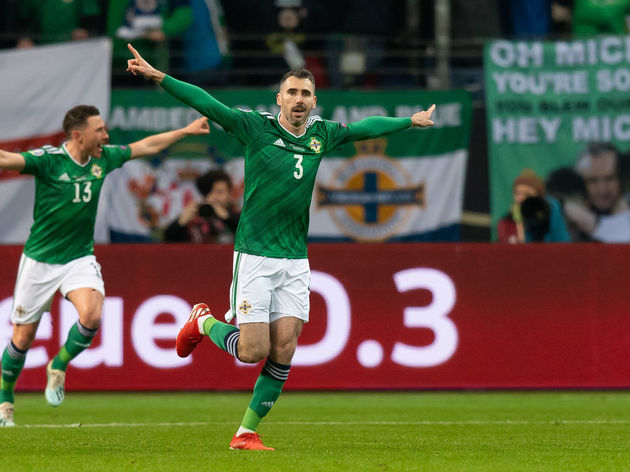 Michael O’Neill has forged a decent football side in the form of Northern Ireland. They might not always be the most pleasing on the eye, but having got them into Euro 2016 playing that brand of football, there is no reason to stop. Except that he’s now Stoke City’s manager. So, that aside.

Either way, they came within a whisker of automatic qualification to Euro 2020, which says a lot when they had both Germany and Netherlands in their group. However, with the final match of the group stages not being able to prevent them from featuring in the playoffs, the fact they went in front against Die Mannschaft – in Germany – will have been reason to celebrate for the traveling faithful.

Their lead lasted 12 minutes. Unfortunately, it didn’t stop there, and the final score finished 6-1, so we’ll wish them better fortunes when they head to face

Gareth Bale’s Slip of the Tongue

We all saw that magnificent banner held up by one of the Welsh spectators. It was pure #bants. ​Gareth Bale

And can you blame him? An Aaron Ramsey double against Hungary ensured Wales will avoid the playoffs and head straight to Euro 2020, in what was a supremely professional and composed showing.

An Unlikely Source Netted a Hat-Trick in Thumping Netherlands Win Having missed out on the last two major national tournaments, under Ronald Koeman there appears to be a new lease of life for the Netherlands. Finishing second in their Euro 2020 qualifying group and earning a spot automatically for next summer’s competition, this Dutch side will unquestionably be among some of the favourites to lift the crown.

Blessed with the likes of Memphis Depay and Quincy Promes in attacking positions, it was a surprise to see Georginio Wijnaldum bag himself a brace in their final qualifier against Estonia.

Not known for his goalscoring prowess, the ​Liverpool midfielder put the Estonians to the sword in a match they utterly dominated. Scotland have been, by their own standards, fairly average for an unfortunate number of years.