Regarded as one of the best strikers in the world, she’ll be an exciting addition to Emma Hayes’ side, joining the likes of Fran Kirby, Beth England and Erin Cuthbert up front.

The 26-year-old is used to playing back to back seasons with the Australian W-League and National Women’s Soccer League – but has finally decided to move to England to show off her talents elsewhere.

Here’s five things you should know about the Australian as she joins the WSL for the very first time. While in the US, Kerr has picked up the Golden Boot in three consecutive years – and this season she managed to score 44% of Chicago Red Star’s total goals.

At international level, the striker is not too shabby either. In 84 appearances for her country, Kerr has scored 38 goals – sitting joint-third in the all-time standings for Australia.

She Captains Her National Side It’s no surprise then, that 11 years later, she now captains the side – after being handed over the armband by coach Ante Milicic in February earlier this year.

Her time as Australia’s captain has seen her net five goals in the 2019 Women’s World Cup, including four against Jamaica before her penalty miss in their last-16 shootout defeat to Norway.

Football Runs in Her Family Her dad, Roger Kerr, was also a coach – and played for East Fremantle in the West Australian Football League. Meanwhile, her brother Daniel Kerr, played for the West Coast Eagles.

She Enjoys a Backflip Her trademark celebration caught the eye of those who watched during the Women’s World Cup and we may be seeing a lot more of Kerr’s backflips in the WSL come January.

She’s Not One to Shy Away from Controversy 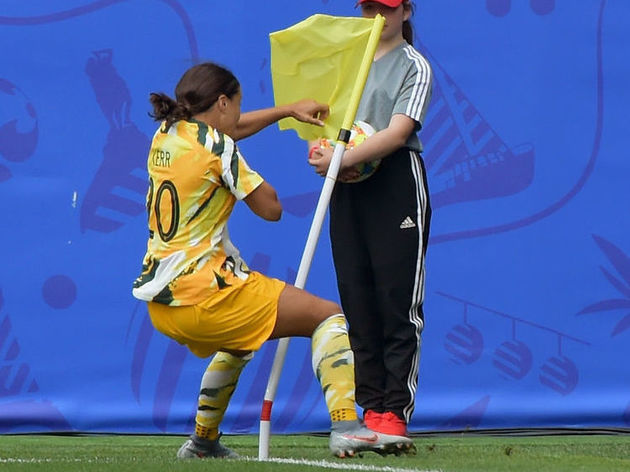 The straight-talking Australian told the cameras to ‘suck on that one’ as her team came from behind to defeat the Brazilian side, proving their critics wrong.

Following her team’s shock loss to Italy in the opening round, Kerr was the first one to address the haters as the Matildas redeemed themselves the following match.