​Manchester United are at one of the lowest ebbs of their modern history. There is a genuine argument that last weekend’s 1-0 defeat to a downtrodden Newcastle side was the worst performance by any Red Devils team in the Premier League era.

Although Ole Gunnar Solskjaer should not shoulder all of the blame for his side’s lowly 12th position in the Premier League, United’s shoddy run of form could see him receive his P45.

Countless candidates are already being touted to take over from the Norwegian at Old Trafford. Some seem like they could be a good fit and others, well, don’t.

Luckily, 90min have trundled through this swamp of rumour and speculation and evaluated all of the most likely candidates for the post. So sit back and strap in United fans – it’s going to be a bumpy ride. ​The bookies favourite to take over from Solskjaer was one of the most popular managers in world football until a recent poor run of form made it unfashionable to sing his praises.

​Tottenham have only won once in their last six games, with defeats to lowly Colchester United and a 7-2 mauling by ​Bayern Munich being particularly distressing. Many suggest Pochettino has done all he can at the club.

His experience at rebuilding a club, like he has done at Spurs, makes the 47-year-old a very attractive candidate, however there are doubts as to whether the messy situation at United would appeal to him. Despite his recent blip, Pochettino’s stock remains extremely high and he may want to wait for a more appealing job to become available in the future. ​Tactically versatile and a supreme motivator, Allegri got his first big managerial break at ​Milan. Whilst at San Siro, he led his side to their first Serie A title for seven years in 2011, before being hired by ​Juventus in 2014.

He took over from the remarkably successful Antonio Conte and did not disappoint. Allegri brought a more relaxed attitude into training that continued to bear results, as evidenced by the five league titles the Old Lady would secure during his time at the club.

It’s hard to judge how much of a success the 52-year-old would be at Old Trafford. Obviously his time at Juventus suggests he would be prepared for the intense scrutiny that comes with sitting in the Old Trafford hot seat, but he has little experience at rebuilding an unsuccessful team from scratch. ​You know what this Manchester United team needs? Character. Character and honesty. Why not give Brendan a call?

Jokes aside, Rodgers’ early success at ​Leicester City has made a lot of his critics reevaluate their feelings towards the man who came so close to ending Liverpool’s Premier League title drought in 2014.

Leicester are currently playing attractive, possession-based football with a killer instinct, something Manchester United haven’t exhibited for a number of seasons. The Northern Irishman’s record of developing young players also suits him well to the position. There are a number of issues with this appointment though. By departing the King Power Stadium, Rodgers would arguably be giving up a genuine chance to get the Foxes into the Champions League this season.

Secondly, and much more importantly, appointing an ex-​Liverpool manager perhaps is not the best way to get the United fan base back on side. Back to the drawing board on this one. Seeing as their last appointment of a former player is going so well, why not keep the theme going and offer the job to Laurent Blanc.

Blanc spent two season at Old Trafford during the twilight of his career, bouncing back from early criticism to help the Red Devils secure the Premier League title during the 2002/03 season – the last of his long career.

The Frenchman then moved into management after hanging up his boots. Following spells with Bordeaux and France with a move to PSG, where he won three league titles before departing the club at the end of the 2015/16 season.

Since then, Blanc has remained out of the game but he may be tempted to return should his old club come in with an offer. 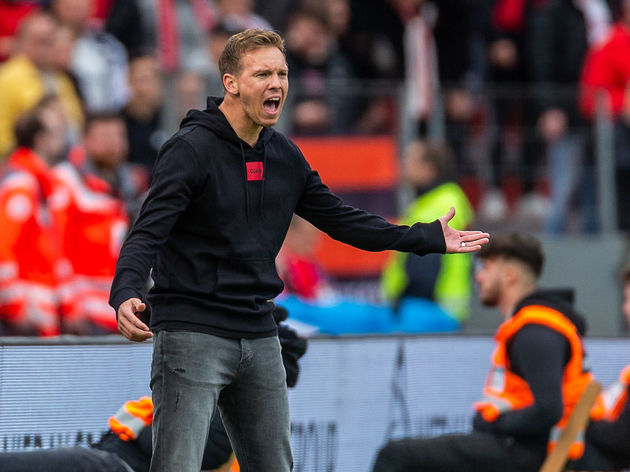 ​The hippest, most daring option United should have on their shortlist, Nagelsmann would give United a distinct tactical identity and, if afforded enough time, would surely create a dynasty at the club.

The German made a name for himself at Hoffenheim with his innovative 3-5-2 formation and eccentric fashion choices, helping Infamous for guiding Ajax into the Champions League semi-finals last season, prior to this Erike Ten Hag lived a previous life as the coach of Bayern Munich’s B team during Pep Guardiola’s time in charge of the club.

The Spaniard’s influence is evident in how Ten Hag likes his team to play. Continuing the legacy of Johan Cruyff at Ajax, the Dutchman insists on his side being technically competent so that they can keep possession and move intelligently between the lines.

Despite this, Ten Hag would be somewhat of a left field choice for the United job owing to his lack of experience at the highest level.

He would however, impart an attractive attacking style on the team and give a lift to fans who have been forced to watch such drab performances for so long.