That first World Cup meeting 28 years ago was narrowly won by the Americans en-route to lifting the trophy, with the Swedes also reaching the latter stages, eventually finishing third. It was each country’s first ever World Cup game and it looked as though it was going to be a comfortable victory for the USA after goals from Carin Jennings (2) and a young Mia Hamm gave them a 3-0 lead, only for Sweden to pull two back in quick succession.

They didn’t meet at all in 1995 when Norway lifted the trophy, or four years later when the ’99ers’ generation of the USWNT famously beat China in a now iconic penalty shootout in the final.

The next meeting came in 2003 on American soil – China had initially been due to host until the SARS outbreak prompted a rethink – and saw the USA beat Sweden again.

This time it was 3-1, with several survivors from the 1991 American roster including Hamm, Brandi Chastain and Julie Foudy. Kristine Lilly, another from 1991, scored first, with Cindy Parlow and Shannon Boxx also finding the net. Victoria Svensson got Sweden’s consolation. The USA topped the group, but it was actually Sweden who went all the final that year, losing to Germany. The Americans, meanwhile, fell at the semi finals and finished third.

In stark comparison, the 2007 World Cup was a disaster for Sweden after they failed to get beyond the group stage of the competition for the first time. Abby Wambach scored both goals as they lost 2-0 to the United States in their second game after an earlier draw with Nigeria, and a subsequent win against North Korea wasn’t enough to progress.

That was the year the USA were hammered 4-0 in the semi finals by Brazil, prompting Hope Solo to publicly criticise coach Greg Ryan after being unexpectedly dropped beforehand. 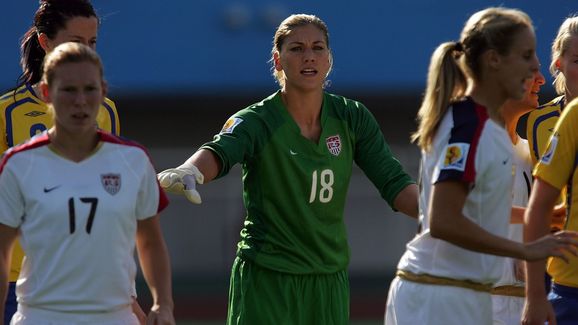 Sweden finally got their first World Cup win over the United States in the 2011 group stage courtesy of goals from Lisa Dahlkvist and Nilla Fischer in the third and final game that doubled as a group decider. Wambach also scored for the Americans, but 2-1 was how it stayed.

Sweden topped that group and were eventually knocked out in the last four by eventual winners Japan. The USA, despite not winning a World Cup group for the first time, actually got all the way to the final and it was a penalty shootout that gave Japan the victory.

The 2015 meeting between the United States and Sweden, by now familiar rivals, produced one of the few 0-0 draws in Women’s World Cup history. The Swedes have played out a dramatic 3-3 draw with Nigeria in game one, but managed to shut the Americans out in game two. A third draw for Sweden in the final group game left them undefeated, but without a win, although in the expanded 24-team tournament their three points were enough to progress. They went no further than the last 16, though, after being thumped by Germany.

The USA, on the other hand, navigated their way through the rounds, driven on by the unplayable Carli Lloyd, and eventually thrashed Japan 5-2 to lift their third World Cup trophy.

Perhaps surprisingly given both countries’ historic strength in women’s football and regular meetings, the United States and Sweden have never yet met in a World Cup knockout game. Having also faced each other in the group stage of the first ever women’s football tournament at the Olympic games in 1996 – a clash won 2-1 by the United States – they did finally meet in a knockout setting at the last Olympics in 2016, which remains their most recent competitive clash.

After the game, Hope Solo labelled the Swedes a ‘bunch of cowards’ over their defensive tactics, directly contributing to the end of her career after she was fired by U.S. Soccer. Sweden went on to claim a silver medal, while for the United States it was a first ever Olympic tournament that ended without a medal of any colour after five previous top three finishes.

As the 2019 meeting beckons, this is truly one of women’s football’s great international rivalries.