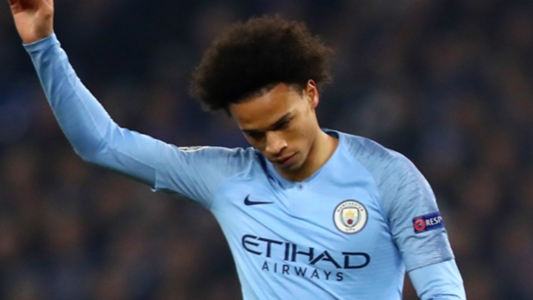 Leroy Sane’s stunning free-kick equaliser and a subsequent winner from Raheem Sterling helped Manchester City to a come-from-behind 3-2 win over Schalke in Wednesday’s Champions League round of 16 first leg clash, though the German claims he felt “sad” after helping down his former club.

A pair of first-half penalties for Schalke had the Bundesliga side out in front following Sergio Aguero’s opener. A red card to Nicolas Otamendi on 68 minutes also left the Premier League outfit playing down a man as they chased the match.

But Sane’s brilliant free-kick leveled matters in the 85th, before Sterling’s solo effort in stoppage time proved to be a winner for Pep Guardiola’s side, leaving Sane to praise the atmosphere at his former club even in defeat.

“I was a little bit sad for Schalke, because the atmosphere was amazing like it always is,’ he told BT Sport following the win. “Schalke did really well, the way they defended made it difficult.

“At the end we did it, we scored three goals away – that was the most important thing.

“You can see the will is a lot, we never give up, we always want to keep fighting.”

Match-winner Sterling had no such sadness and was proud of his side from sticking together even through the adversity of going down a man and suffering through controversial VAR decisions.

“A really tough game, we made it difficult for ourselves at times, but we stuck together, even with 10 men,” he told BT Sport.

“For my goal, it was a little nudge in the back of the defender, and I took my opportunity and we got the three points – err, a win!

“We have had some difficult patches this season, you can’t win every game 2-0 or 3-0.

“These are the games in the Champions League we know the opposition can hurt you at any point and we’re going to be under pressure at times, but we’ve got to stay with it.

“We did that brilliantly and showed what a great bunch of lads we are and what we’re heading towards.”

City are tied on points with Liverpool atop the Premier League and next face a Carbao Cup final against Chelsea on Sunday.

They’ll host the return leg against Schalke on March 12.